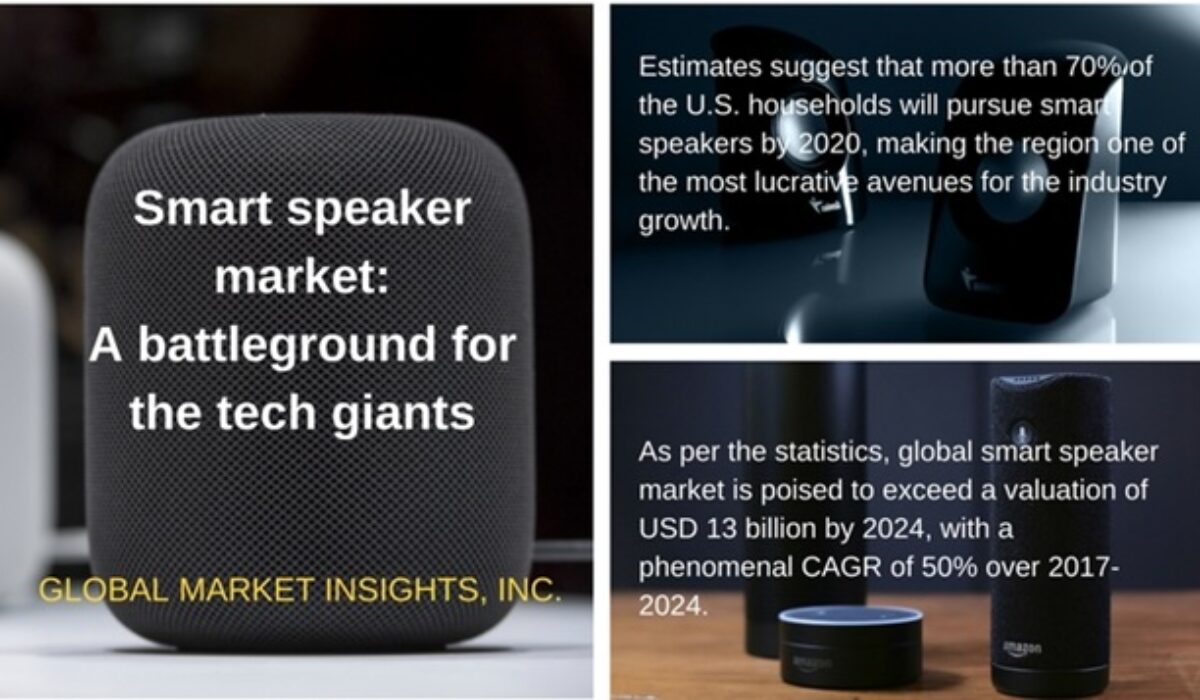 The unprecedented growth of IoT has indeed led the technology marketplace to become a battleground for revenue & sustainability. Smart speaker market is one of the most renewed yet fascinating industries witnessing a dynamic transformation in this ‘connected world.’ The growth recorded by the smart speaker industry over the years, itself is a testimony of the revolution it has brought in the audio devices market. The growth scale not only cites the massive opportunities in the smart speakers market but has also sourced the influx of technology behemoths to exploit the potentials of the designated billion-dollar industry over the coming years.


Amazon can be rightly and logically termed as the first inhabitant of this gigantic industry space, with the launch of Amazon Echo in 2014. The device having no parallel till date holds a major chunk of the smart speaker market. As per reliable sources, in 2016 the sales of smart speakers recorded a percentage hike of approximately 600% compared to that in 2015. In terms of volume, an approximate of 4.2 million smart speakers were sold in Q4 – 2016, of which Amazon’s products procured 88%.


However, having pioneered the smart speakers market for two years, the latest state of affairs in this business space suggests an end of monopoly for Amazon. With Google and Apple having already registered their names in the share war, Samsung, Alibaba, Lenovo, HP are the few more names following the trend.


A glimpse of the past, present, and future product landscape of the smart speaker industry


2014 –  This was precisely the birth year of smart speaker market. Amazon, with the launch of Echo made the market largely to itself for a monopolized span of nearly two years, unless interrupted by its rivals in the tech space such as Apple, Google, etc. However, the company has successfully sustained its position in the burgeoning industry with the latest reports unveiling its 70% share in the overall U.S. home speaker market.


Post the introduction of voice assistant enabled home speakers, the technology giants underwent a radical transformation in their rational perspectives, which on one hand shook the market dominance of Amazon and on the other end acquainted the world with renewed, sophisticated, hi-tech, and ‘smarter’ versions of speakers in the audio devices industry.


2016 – The year marked Google’s entry in the smart speakers industry, with the launch of Google Home. The period also witnessed various announcements of Alexa powered speakers at CES, Fabriq Smart Speaker being one of those.


2017 – So far, the most intriguing year in the smart speaker industry with a queue of developments to follow. The year witnessed a dramatic shift in the competitive landscape of the smart speaker market with new entrants exploiting the business space. Some of the novel names include Samsung, Alibaba, and Apple. Reportedly, Apple’s HomePod is expected to be launched later this year.


What’s in store for the smart home industry product landscape?  Having a dynamic product landscape, smart speaker industry is poised to witness a series of developments over the years. Both the Bluetooth smart speakers as well the Wi-fi enabled speakers will witness an escalating growth curve over the coming years. Lenovo’s smart assistant, Harman Kardon Invoke, HP Cortana Speaker, Tencent Speaker, and Samsung Bixby Speaker are few of the names ought to join the heated smart speaker industry space.


Having an extensive and vibrant product landscape, it is quite certain for the industry to witness an aggressive competitive terrain. Industry analysts cite smart speaker market to witness a heated rivalry over the coming years with parameters such as technological advancements, price, quality, and efficiency defining the competitive hierarchy of the contenders. In the coming years, the industry would also make room for small yet innovative companies to exploit the sizable opportunities in this space. However, it is yet to be discovered how far these companies survive or even penetrate this battleground against the established tycoons.


Amazon – The e-commerce giant is till date the leading name in the smart speakers market. As per the estimates, Echo products have penetrated their way in approximately 9 million U.S. households. According to the projections, Amazon’s Echo will hold more than 70% of the voice-enabled speaker consumers in the U.S. this year, followed by Google Home with nearly 23%. Sources further project that Amazon’s Alexa would generate a massive revenue of nearly USD 10 billion by 2020 and approximately 60 million Alexa devices will be sold in 2020. Reportedly, the firm will sell close to 24 million echo speakers this year.


Google – Despite the threat of just being falling in the “me too” category post the launch of voice-enabled Amazon’s Echo, Google with the launch of Google Home in 2016 made a rather successful entry in the smart speaker market space. The technology magnate has a proven record of its profound expertise in the smart home ecosystem. As per reliable statistics, around 2% of the global consumers own a Google Home. The device is poised to chart out a commendable path ahead with its capacity to become part of a ‘personal Google’ for every owner. As per industry reports, Google Home’s phenomenal penetration in the smart speaker industry is fairly evident from its surging brand awareness which has almost harmonized 80% with Alexa’s, despite the former being in the market for a relatively shorter span. Reportedly, since its launch in November 2016, more than 500,000 units of Google Home have been sold.


Apple – Powered by Siri and including Beats Audio technologies, Apple’s smart speaker will be able to stream music, answer basic questions, and monitor HomeKit – linked Smart Home devices. In the burgeoning smart speaker market, Apple’s entry is slated to bring some remarkable fragmentation. The firm could exploit the business by utilizing the loyal customer base it has accrued through its phones and computers. The entry into this market will certainly provide Apple with another channel to extend its revenue portfolio. Reportedly, Apple’s services business witnessed a y-o-y growth of above 15% in Q1 2017, driven by the App Store, iCloud, and Apple Music. The retail price of HomePod, phone based Siri smart assistant is USD 349.

READ ALSO  The What, Why, Where, and How Guide to Live Streaming Video


Samsung – The South-Korean multinational conglomerate is another player swayed by the lucrative growth trends of the smart speaker industry. The firm is all set to test the waters with the launch of Bixby powered AI speaker – Vega. The launch date has not been disclosed yet. The device may face massive challenges in the U.S., the largest growth avenue for the smart speakers industry, on grounds of the linguistic barriers.


Alibaba –The Chinese e-commerce giant plans to launch its smart speaker dubbed as Tmall Genie in August this year. Having a strong user base of 450 million, Alibaba is a solid contender in the ‘Chinese’ smart speaker industry, with an intense probability of this loyal customer base preferring the company’s new home assistant. The company faces direct rivalry from Baidu which has a deep expertise in AI machine learning, and voice recognition domains. Alibaba’s penetration of global markets pertaining to smart speakers is yet to be witnessed.


The fiercely competitive landscape of the industry is ironically in the consumer’s favor, leveraging them with more sophisticated and smarter speakers. This is evident from the exponentially growing consumer base of the smart speaker industry.


The growth of the smart speaker industry has been acclaimed as one of the positive disruptions in the audio devices industry. And why not? These speakers have brought in a lot of value-adds to the consumers, rather than just being perceived as a music player. The industry is also set to revolutionize traditional marketing and advertising domains, with an influx of plethora of content platforms. Driven by the smart need of the smart people demanding more and more from smart technology, the smart speakers market is on the way to becoming one of the most fascinating markets to watch unfold. As per a report by Global Market Insights, Inc. “Global smart speaker market size is poised to witness a colossal CAGR of 50% over 2017-2024, exceeding a valuation of USD 13 billion by 2024.”