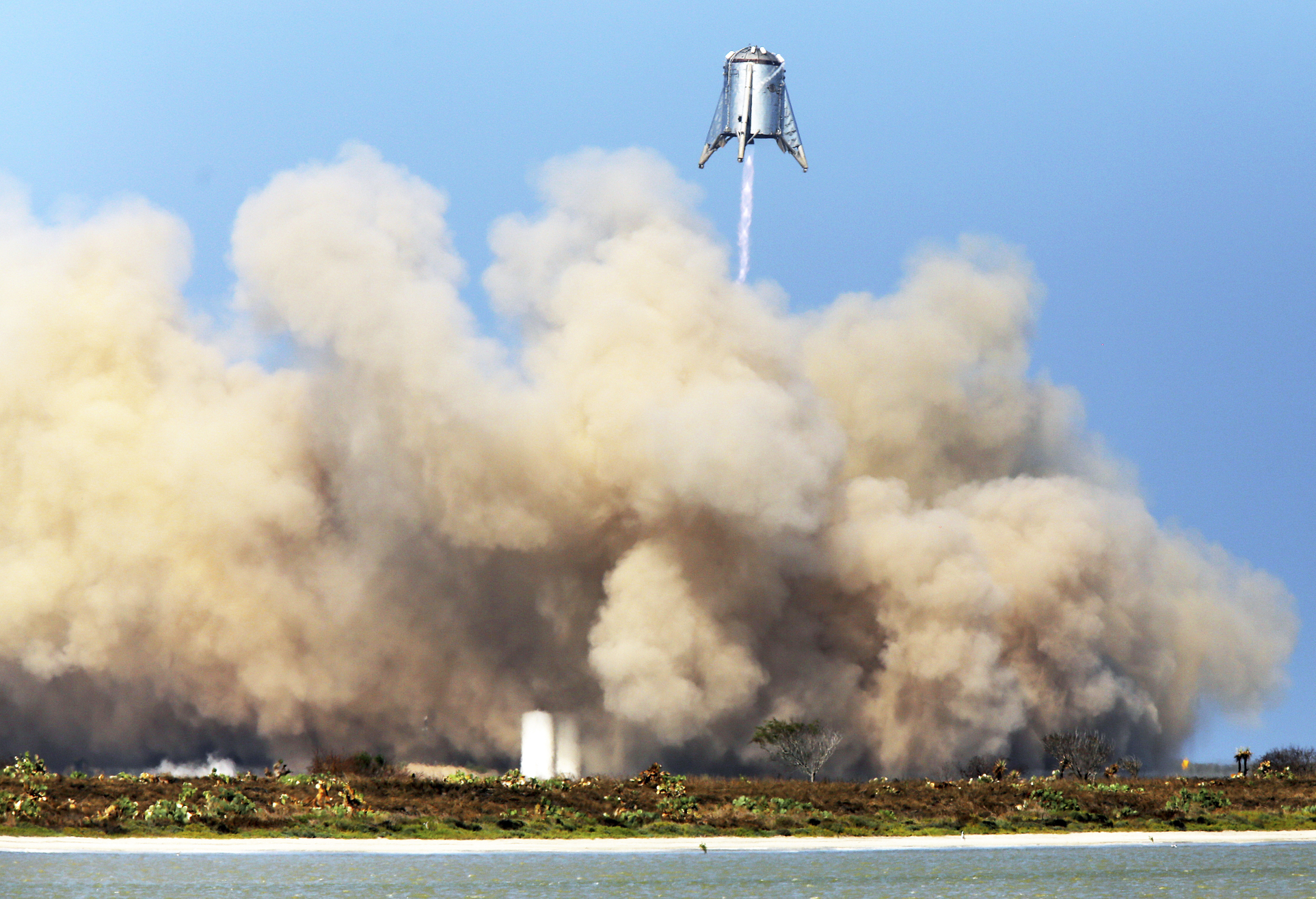 SpaceX’s stubby rocket Starhopper shot into the air Tuesday afternoon in a test launch that brings Elon Musk’s company closer to his vision of human travel to Mars.

The test was Starhopper’s second and highest hop. The craft — a test vehicle for the Raptor engine that will be included in more sophisticated prototypes — was intended to fly about 500 feet in the air Tuesday.

Shortly after 5 p.m. CDT, the rocket spewed a stream of flame from its bottom as it flew into the air, rising above the cloud of smoke its launch created. It remained upright and gently drifted sideways as it climbed, peaked and descended, then touched down a short distance away from the launch site. The flight lasted about a minute. When the smoke cleared, Starhopper appeared intact.

The craft is set to be retired after Tuesday’s flight and cannibalized for parts as the company ramps up work on Starship, the rocket it hopes to send to Mars.

Last month Starhopper made its first-ever flight, hovering for a number of seconds before landing back on the ground. That test was intended to reach an altitude of about 65 feet. In a July 25 tweet, SpaceX Chief Executive Musk called the flight successful and cheered that “water towers can fly,” a reference to the prototype’s squat, rounded appearance.

SpaceX worked last year on Starhopper at its lesser-known Boca Chica facility in south Texas, before Musk announced work on the prototype at the end of the year and unveiled renderings in January.

Renderings of the Starhopper prototype showed a bullet-shaped stainless steel tube. But in January, Musk tweeted that strong winds had damaged the nose cone. SpaceX decided not to bother making a replacement and instead to do tests without a nose cone, giving the rocket its stubby water tower appearance.

Meanwhile, the Hawthorne company is building other, more complex prototypes of its Mars spaceship. SpaceX workers in Boca Chica and in Cocoa Beach, Fla., are building spaceship prototypes that will have at least three Raptor engines fueled by methane and liquid oxygen. The teams will be doing “simultaneous competing builds” at their respective sites to “see which location is most effective,” Musk tweeted in May. “Answer might be both,” he said.

He said last month that one of the prototypes could hopefully fly several thousand feet in a few months.

Starship is intended to carry as many as 100 passengers to the moon and Mars. Last September, the company announced that Japanese e-commerce billionaire Yusaku Maezawa would be the first paying customer to travel around the moon on the vehicle. Maezawa has said his flight will occur in 2023.

Musk has not been shy about SpaceX’s goal of turning humans into a multiplanetary species to protect against any potential extinction on Earth. The company’s current revenue streams are decidedly more terrestrial in nature — satellite launches for commercial and government customers and supply runs for NASA to the International Space Station.

SpaceX’s plans to reach Mars are
a cornerstone of the company — employees recently wore shirts that read “Occupy Mars,” and the company’s online store started selling shirts that say, “Nuke Mars,” which refer to Musk’s Twitter musings on how to warm up the Red Planet.