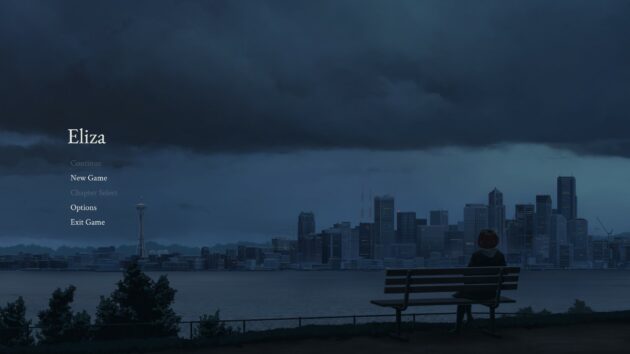 It’s tough to make a traditional recommendation for Zachtronics’s Eliza. It’s a thoughtful, short visual novel – an interactive, illustrated story – that makes a point of realistically depicting someone who’s wrestling with depression and burnout.

“It’s not an easy sell. ‘Hey, play this game with a lot of intellectual baggage to it, where people are sad,’” said Matthew Burns, Eliza’s writer and director. “My hope was that people who aren’t necessarily big gamers could play it and get something out of it. It’s not necessarily a super gamey game. It has a story that I think is relevant, especially to the Seattle tech community. It’s from that community, and I hope that people can reflect on it a little bit.”

Burns is a former producer at Bungie and Microsoft, who worked on a few of the Halo games and the original Destiny before going indie in 2015. Since then, he’s worked on several titles published by the Redmond, Wash.-based studio Zachtronics, such as last year’s puzzle game EXAPUNKS, and contributed writing to Johnnemann Nordhagen’s Where the Water Tastes Like Wine.

Eliza is Burns’ first project as a director. While its script has been a side project for Burns since 2014, the game itself was built in a year with a 5-person team, utilizing Zachtronics’ in-house engine and a cast of surprisingly well-known voice actors. 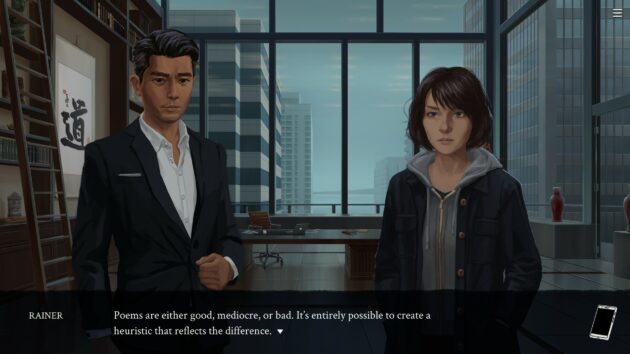 Eliza is set in Seattle, about five minutes into the future. Its protagonist is 34-year-old Evelyn Ishino-Aubrey, who was one of the programming superstars at a local tech giant called Skandha before she suddenly and spectacularly burned out.

Evelyn emerges from three years in what amounts to a self-imposed exile – working at a bookstore and not talking to anybody she used to know – to discover that one of her old projects has become the basis of a new business in the gig economy, which her old boss is talking up as a “mental health revolution.”

Eliza is a machine-learning program that serves as a cheap personal counselor, where human “proxies” wearing AR headsets provide a face and voice for the questions and answers generated by Eliza’s code. Despite her misgivings, Evelyn picks up a job as one of those proxies, and accidentally gets back on the local tech industry’s radar.

Eliza is six chapters long, with each chapter representing a week or so of Evelyn’s life. You get to choose the course Evelyn’s life takes across that period, like who she hangs out with or pushes away, and eventually decide what she’s actually interested in doing with the rest of her life. The replay value of the game comes from your ability to change the course of the story by making different decisions, which is sped up by a chapter-select function that you gradually unlock across the course of your first run. 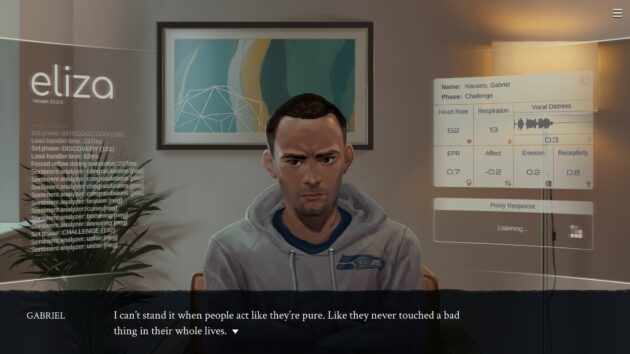 Admittedly, Eliza does initially require a lot of suspension of disbelief. Its initial conceit – that at some point in the near future, even as intimate a process as mental healthcare might become something you do via strangers, apps, and algorithms – is a lot to swallow, but it does make more sense as you progress through the first few chapters. If anything, the more you learn about it, the more Eliza’s take on it starts to make a sick sort of sense.

It helps that psychology isn’t the story’s only focus. Eliza is one of the more stark portraits of a certain specific type of anxiety – that nagging sense you get in your early 30s that whatever you were “supposed” to do with your life, it wasn’t what you’ve done and isn’t what you’re doing now – that I’ve ever seen in fiction. It touches on topics such as artificial intelligence, existentialism, self-forgiveness, and more as it goes, and while it’s a slow, talky experience even by the standards of a visual novel, it gives you a lot of food for thought across its running time.

It’s worth mentioning that Eliza is a dramatic character study at heart. It goes right up to the edge of cyberpunk a couple of times, but never quite goes over. Video games in general tend to be genre pieces, but Eliza is unusual if not unique in that it’s almost a straight drama. As a result, it could be a good “gateway product” for people who don’t ordinarily go in for visual novels or video games, especially if they’ve got a history in the tech industry. A lot of what Eliza has to say cuts very close to the bone. 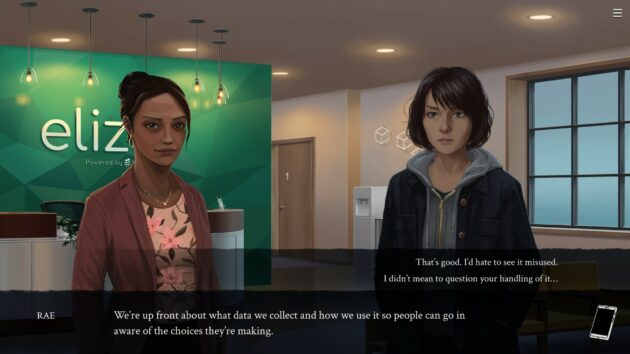 If I have a single abiding criticism of Eliza, it’s primarily that it’s a choice-driven narrative that makes a number of its choices too easy to dismiss. The game’s primary story paths, particularly as you approach its end, are roughly divided up among the main people in Evelyn’s life. None are actively malicious, but two are obviously psychologically brittle, and one seems cheerfully ignorant that he’s racing towards something like six kinds of possible disaster.

It feels a lot like the game provides a soft pressure towards one particular choice, as it’s the one that’s clearly the least destructive to both Evelyn and the world around her. It still isn’t as fond of “railroading” the player – offering big choices that turn out to be meaningless or basically cosmetic in the long run – as a lot of other games I’ve played in this space (looking right at you, Telltale), but it still feels like its major choices aren’t really choices. Then again, your mileage may and probably will vary.

Beyond that complaint, Eliza is a solid, well-written interactive story. It’s working with some heavy and depressive themes, and like any similar work of fiction, it’ll ruin your evening if you aren’t in just the right mood. It can be a particularly rough sit if you have similar problems to Evelyn or you’ve known people who have, especially in the first chapter, but it’s worth taking a couple of hours to explore its narrative. It’s deftly written with a subtle touch to its prose, and there’s enough variation across its running time that it rewards a couple of extra plays.

Eliza debuted on Oct. 10th in the Nintendo Switch eShop for $14.99. It was initially released in August on digital platforms for the PC, such as Steam and Itch.io.