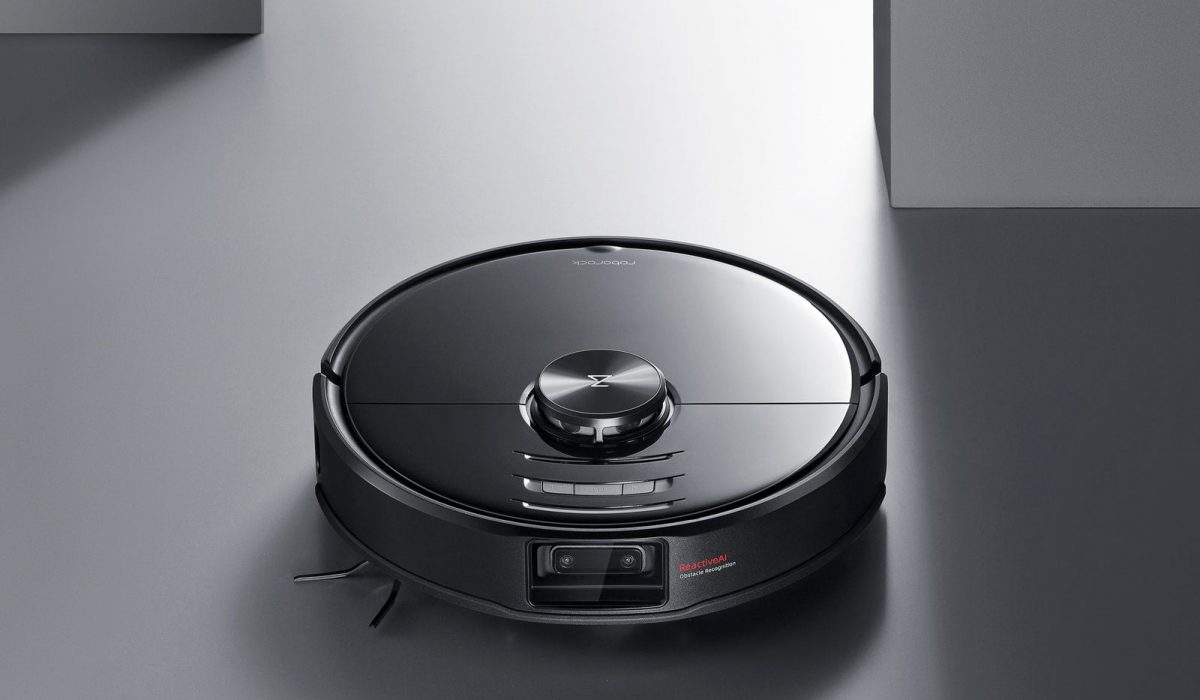 The Roborock S6 MaxV aims to explicitly address the most feared robot vacuum urban legend: dog poop. It’s horrifying to watch, but many bot vacs will run into a pile of dog poop and merrily spread it all over the house without realizing it.

The S6 MaxV uses a stereoscopic dual-camera system and ReactiveAI to recognize pet waste and give it a wide berth in your house.

I personally prefer a more streamlined (and cheaper) bot vac, but I have to admit that the Roborock does a pretty great job. It’s fast, efficient, and powerful. The app has also gotten easier to use since I tested the E20 (make sure you’re using the Roborock app, not the Mi Home one). You can tinker endlessly with your home map, painstakingly assigning different rooms, no-go zones, and no-mop zones. If you’re house-training a new pet, this might be the perfect vac for you.

Most robot vacuums navigate via a combination of different sensors: bump sensors to keep it from running into walls, cliff sensors underneath the vacuum to look for drops, and optical sensors on the sides or top to check for obstacles.

High-end robot vacuums like the iRobot Roomba S9+ use sophisticated 3D sensors and process data incredibly fast as they move. However, it might be a little easier to understand the S6 MaxV’s system, because it’s similar to the one in our heads. Like a pair of eyeballs in the front of the vac, two cameras and ReactiveAI check for obstacles and identify them.

Once you start the robot vacuum and connect it to your Wi-Fi, the app immediately asks you if you have a pet. I do, so I said yes. Since I’m reviewing this thing, I then spent way too long in my front yard, looking at a pile of old dog poop and wondering if I should put it on my living room floor.

READ ALSO  A Guide to Buying a Gaming Processor

Sadly, I chickened out. Instead, I put little palm-sized piles of multicolored Lego constructions in the living room. At first, the S6 MaxV did not leave them untouched. It did push over one small structure that my 3-year-old insisted was a brachiosaurus (yeah right, kid). But after a few days, I checked the map to find that it was, indeed, carefully circling around the unknown obstacles.

I feel fairly confident that ReactiveAI would be able to identify dog poop. It nailed the other categories of trouble objects in my house, like power strips, shoes, and pedestals. These are all items that have been troublesome when I’ve tested robot vacs in the past. It pinpointed them, and it didn’t get stuck. Once it’s finished cleaning, you can check the bot vac’s path in the app and check for pictures.

A word about robot vacuum cameras: A robot vacuum with a video camera is not a new innovation. I’ve tried several. One that shall remain nameless woke up on its own, trundled out from under the couch, turned to look at our babysitter while she was reading, and went back to the dock. It was alarming.

A Wi-Fi-enabled camera that can move around your home seems like a very tempting target for hackers, especially one that transfers images to the cloud. However, I can also see why some people might find it useful. If you must have a camera, Roborock uses a Qualcomm security feature on the chipset that means that firmware can’t be modified or installed without authorization from Roborock. On the other hand, since the robot vacuum uses the camera to navigate, the camera can’t be taped over or turned off.

At 2.5 kPa of suction pressure, the S6 MaxV is pretty dang powerful. For comparison, a hand vacuum usually has a suction power of about 1.7 kPa. That also means that it’s loud. On maximum mode, I measured it at 75 decibels; on balanced mode, it was about 70 decibels. That’s too loud to hold a conversation or watch television in the same room while it’s running.

READ ALSO  EBay bans assault rifle parts. Here's how sellers get around it

To keep it quieter, you can assign different power modes to different rooms on the map. And max power really does work. It sucked up dog hair that’s normally so embedded I need a heavy push vacuum. Our entryway was clear of grit, and the edges under my kitchen table are now free from cracker crumbs. It also didn’t fall off my kitchen step, a drop from which many autonomous vacuums have met a terrible fate.

The S6 MaxV is also fast, with an extremely long-lived battery. It cleaned 400 square feet in my house in 40 minutes, and with 80 percent battery life left. It can run for up to 3 hours, when most bot vacs that I’ve tried run out of battery after less than 2.

That extended battery life would come in handy if you mop immediately after you vacuum. I myself find the mopping feature of dubious utility. First, you must designate mop zones, clip on the mop attachment, and fill the tiny reservoir. If you don’t want to pick it up and move it yourself, you need to include a mopping path for the mop from the dock. Even on max water, the cleaning cloth barely got damp.

It’s so much more effort than just grabbing a Swiffer, but it might be worth it if you find mopping unusually gross or just wouldn’t do it if you didn’t have a robot mop. It is incredibly fast; it cleaned my kitchen in under 8 minutes!

It may seem ridiculous to pay this much money for a robotic vacuum with such a specific use case as having a new puppy. However, this use case happens to be why some people get robot vacuums. As a reviewer who has a dog resting its head on her foot as she writes this, I can see why a pet owner would want a robot vacuum that can see poop piles and de-fur your carpets with all the force of a deadly tornado. If there are still any dogs at your local shelter, picking up an S6 MaxV along with it probably wouldn’t be a bad idea.