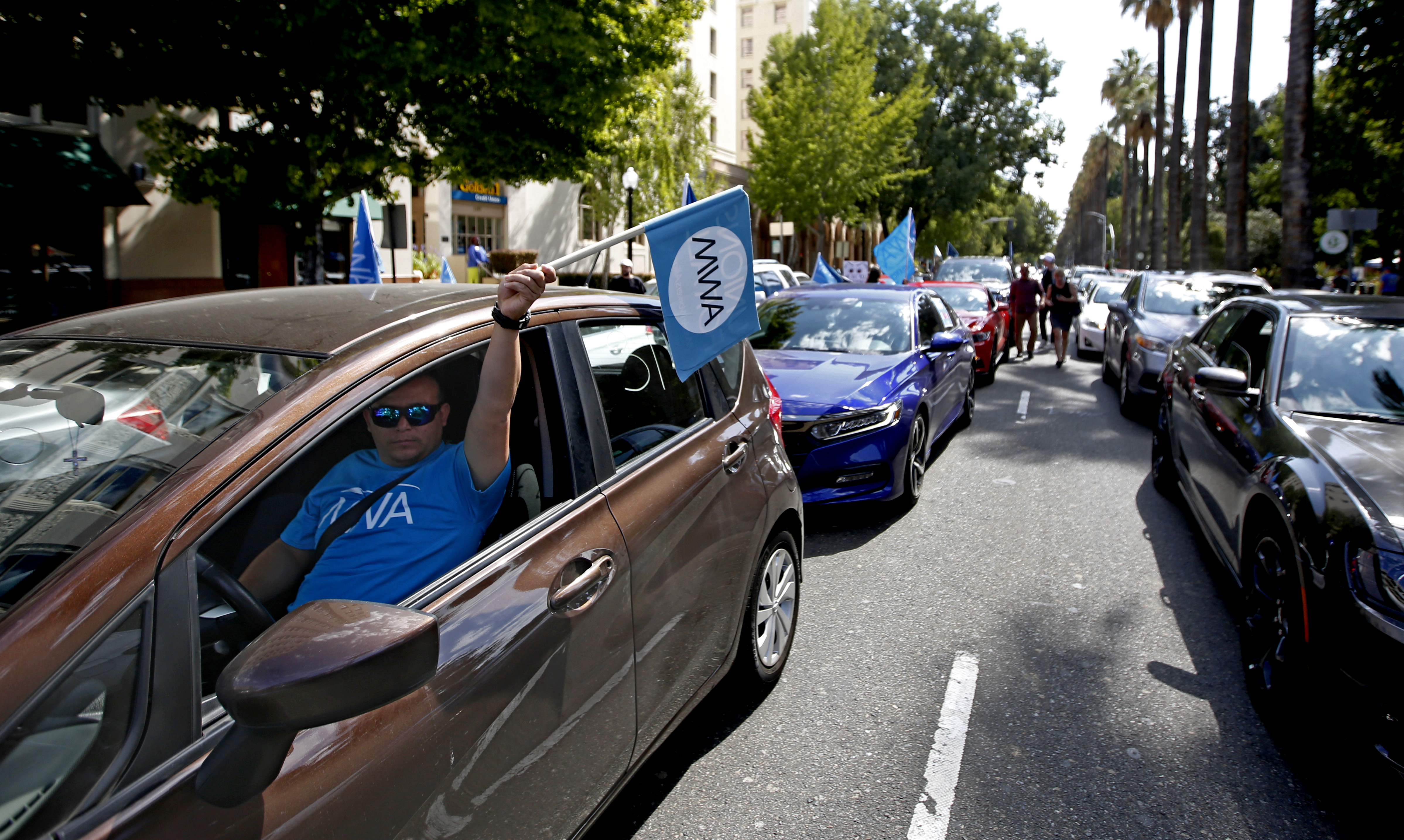 In the face of a looming deadline, Uber Technologies Inc. and Lyft Inc. are throwing new weight and tens of millions of dollars behind their fight to keep treating drivers as independent contractors in California.

The ride-hailing companies said Thursday they will commit $60 million to fund a statewide initiative aimed at the 2020 ballot to create an alternate classification for drivers that would include some employee protections and a guaranteed minimum pay. Later, delivery service DoorDash said it would commit an additional $30 million.

The money would be more than enough to qualify an initiative and mount a substantial campaign in fall 2020.

The announcement comes a day after Tony West, Uber’s chief legal officer, and Lyft President John Zimmer met with Gov. Gavin Newsom and his chief of staff, Ann O’Leary, to discuss Assembly Bill 5. That bill, written by Assemblywoman Lorena Gonzalez (D-San Diego), would codify a state Supreme Court ruling that makes it harder for companies to classify their workers as independent contractors.

With just over two weeks left in the legislative session, tech companies are trying to cut a deal with labor officials and legislators. West said in an interview that the companies have all but accepted that AB 5 will pass and the governor will sign it. Their focus is now on a second bill that creates an alternative employment category for gig workers.

A ballot measure would be a last resort, West said. He said he left the meeting with Newsom hopeful that a deal could be cobbled together and passed before the legislative session ends Sept. 13.

But talks with labor groups have stalled in recent months. The Service Employees International Union, the state’s largest labor organization, supports a separate ride-share driver bill as a way for it to organize drivers, thus sidestepping a Trump administration advisory that deems drivers to be independent contractors. “AB 5 is a good first step,” said Bob Schoonover, president of SEIU’s state council. “But without something additional to that legislation you couldn’t organize these workers.”

Other groups, such as the Teamsters and United Food and Commercial Workers, strongly oppose any alternative legislation. The California Labor Federation, which represents 1,200 unions and 2.1 million workers, came out swinging against the proposed ballot initiative, saying it shows “the real motivation of multi
billion-dollar gig companies. They never cared about their drivers or workers. The only thing they care about is their bottom line and making their executives even richer than they already are.”

Gonzalez predicted a separate bill would fail because the labor movement is divided. “I will fight against any third classification of workers,” she said, adding she has “not heard one thing from any of my colleagues about exempting the gig economy.”

READ ALSO  Office 365: A guide to the updates

A spokesman for Newsom said the governor did not expect to reach a deal on the status of ride-share drivers this year, but that Newsom was regularly meeting with
tech companies and labor leaders in the hopes of ultimately finding an agreement. In a statement, O’Leary said the governor wanted to guarantee drivers’ ability to form unions.

“Any suggestion that this administration isn’t aggressively fighting for the right of workers to organize and earn higher wages — including ride-share drivers — is flat wrong,” O’Leary said. “Since Day One of these talks, organizing 200,000 drivers — represented by real unions with real collective bargaining rights — has been a key goal of these discussions, an objective that has been made clear to parties on both sides. The reality is that these drivers have no voice under federal law. The only path for them to join together and form a union is if California steps in.”

Uber has already hired consultants, and the companies expect to start collecting signatures for a statewide ballot initiative by this fall at the latest. Other gig-economy companies may join in on the fund.

The tactic of using a ballot initiative to gain leverage has become increasingly common among business, labor and other interest groups since lawmakers in 2014 allowed backers of initiatives to pull them from the ballot once they’ve qualified. The tactic has achieved varying degrees of success.

Last year, the soda industry persuaded the state to ban local soda taxes for 12 years after it financed a ballot measure aimed for the 2018 ballot that would have further restricted cities and counties from raising all taxes. Under the deal, the industry agreed to pull its tax initiative. By contrast, national paint companies’ efforts to push lawmakers to undo a state court ruling holding them liable for lead paint in older homes fizzled despite the companies’ initiative threat.

Uber and Lyft executives have said treating workers as employees would severely hobble them in one of their largest U.S. markets. It could also set a precedent for other
states seeking to enact new worker protections, which would deliver a severe blow to smaller on-demand delivery players such as
Postmates and DoorDash as well.

The debate has already taken on national relevance as presidential candidates U.S. Sens. Elizabeth Warren (D-Mass.) and Kamala Harris (D-Calif.) weighed in with support for AB 5. On Tuesday, South Bend, Ind., Mayor Pete Buttigieg, also a Democrat, made an appearance outside Uber’s office to stand in solidarity with the caravan of drivers rallying for employee rights.

In the months leading up to the end of the California legislative session, gig companies have talked in vague terms about their proposals for a contractor-employee hybrid that affords workers some benefits such as a minimum wage and a portable benefits package that each company pays into and isn’t tied to one job.

On Thursday, the companies offered additional details. The proposal includes a “net earnings guarantee” of a minimum of $21 an hour, while drivers have a rider, with no limit on how much above the minimum guarantee drivers can earn. It contains benefits such as “injured worker protection” for all drivers across California, and paid sick leave and paid family leave for drivers who spend 20 hours or more per week in booked rides. The companies also proposed a form of “sectoral” employee bargaining, which would enable a union to represent all ride-share drivers as opposed to drivers of individual companies.

“The current system of individual companies reaching bargaining agreements on a company-by-company basis incentivizes companies to fight unionization so they are not at a competitive disadvantage,” the companies’ announcement said. “Sectoral bargaining removes this risk by ensuring that bargained-for standards apply to ​all​ workers, regardless of the company with which they work.”

West said Uber would meet with the bargaining group, and drivers will be able to elect its members to negotiate over pay and benefits.

Shortly after Wednesday’s meeting with the governor, the companies sent out emails to hundreds of thousands of Uber and Lyft drivers across California and millions of riders, pleading with them to ask their representatives and Newsom to “fix AB 5,” as Lyft’s email said.

This week, a caravan of Uber and Lyft drivers drove from Los Angeles and through San Francisco to the Capitol to rally support for AB 5. Drivers called the companies’ proposal insufficient, saying there was no language about guaranteed minimum pay while they are driving around seeking customers.

“It completely ignores whether or not a driver is logged into the app and waiting for rides,” Christian Perrea, an Uber and Lyft driver who said he spends 60% of his time waiting for rides, wrote in a blog post. “We already have this. If we are ‘in’ a ride and counting the hourly rate of earnings based on when we already have a ride or when we are going to pick someone up, the pay would come out to around $21 per hour.”

That said, the proposed minimum is higher than what some other gig companies have proposed. Postmates, for instance, has discussed a pay floor that is tied to the statewide minimum wage, currently $12 an hour.

Many ride-share drivers also believe a separate bill creating a category for gig workers would undermine their ability to unionize under federal law.

“Once you create a new labor category you go backwards, not forwards,” said Nicole Moore, a leader of Rideshare Drivers United, a 5,000-member Los Angeles group. “The new robber barons of the 21st century … are trying to sell the idea of a third category as something that will allow more flexibility than employment. This is the oldest anti-union trope in the book.”