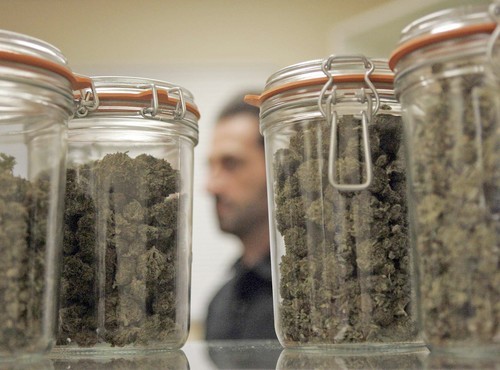 Weedmaps has been the bane of
licensed dispensary owners in California’s fledgling marijuana market.

The site, which lists nearby dispensaries and marijuana delivery services
, has faced criticism for helping unpermitted dispensaries flourish as the state has struggled to permit businesses and fold illegal operators into its budding legal industry. California cannabis regulatory agencies have attempted to crack down on the company in the past, with little success. But now, Weedmaps says it will end that practice, and lawmakers and licensed dispensary owners are cautiously optimistic.

On its Yelp-like platform
, dispensaries can put up menus, photos and other information, and customers can write comments and ratings. In areas where the marijuana market is saturated, Weedmaps charges for higher placements in listings.

Licensed owners have expressed frustration that the website amplifies the presence of unlicensed cannabis sellers, whose skirting of state and local taxes lets them undercut legal operators. Without Weedmaps or its competitors, unlicensed sellers would have to rely on word-of-mouth to bring customers through their doors. (One competitor, Leafly,
said in early 2018
it would bar unlicensed operators.)

“Without the voice that Weedmaps gives, 80% of [illegal dispensaries] would disappear, or would do a fraction of the business,” said Carlos De La Torre, owner of the Cornerstone Research Collective in Eagle Rock.

In February 2018, the Bureau of Cannabis Control sent Weedmaps a cease and desist letter telling the company it was breaking state law by carrying ads from unlicensed businesses.

Section 230 enabled the rapid growth of some of the biggest tech companies, most of which host third party content. The bigger these platforms become, the more difficult it gets to verify the legitimacy of every item of content, said Eric Goldman
, a professor at Santa Clara University School of Law. Without Section 230, these companies wouldn’t be able to risk hosting large volumes
of content, he said.

After Weedmaps invoked Section 230, the Bureau of Cannabis Control chose to focus instead on cracking down directly on illegal businesses, said Alex Traverso, a spokesperson for the bureau.

It’s unclear why Weedmaps decided to shed unlicensed advertisers now. The company revealed the move folded into an announcement about a new program to help support social equity applicants.

In January the Orange County Register reported talk of the state attorney general
taking up a case against the company. There’s also legislation in the pipeline that aims to punish companies like Weedmaps.

“Weedmaps always has and will continue to advocate for a flourishing, legal cannabis market, and taking action to address social equity is integral to making that a reality. Our announcement reinforces that commitment and outlines the program we are implementing to support minority entrepreneurs in the cannabis industry,” Alex Clark, a Weedmaps spokesperson said in a statement.

The lack of details
in Weedmaps’ announcement troubled some critics, who pointed out that the company has not offered specifics on when it will implement its freeze on unlicensed operators or how it plans to eliminate the hundreds of listings for black market sellers on its website.

“While this is a signal that Weedmaps seems to be taking our priority of compliance to heart, like anything, the devil is in the details,” said Nicole Elliott, senior adviser on cannabis in California Gov. Gavin Newsom’s Office of Business and Economic Development, in a statement.

Assemblyman Rob Bonta, who has attempted to push through legislation like this in the past, says it’s a good step forward. “It’s a move that will help honor the people who voted overwhelmingly for a regulated cannabis marketplace,” he said.

Earlier this year, a Times analysis of listings on Weedmaps found there were at least 220 unlicensed dispensaries in Los Angeles advertising on the website, representing about 60% of the total brick-and-mortar cannabis market in California’s largest city.

Many in the cannabis industry say black market sales have helped lead to shortfalls in cannabis revenue since California’s legal market opened for business. In 2018, the state’s marijuana market missed its revenue projection by $160 million. Earlier this month, a fiscal analysis projected the state will see $8.7 billion
in illegal cannabis sales this year, nearly triple the amount expected to be spent on products sold by licensed dispensaries and delivery services.

Some longtime operators are approaching the situation with cautious optimism.