Are you looking for ways to broaden your social media marketing scope in 2018, or to offset potential traffic declines caused by Facebook’s algorithm shifts?

If so, Pinterest could be the platform for you – in this post, we’re going to look at some of key benefits of the visual-focused platform, and how some unexpected brands are using Pins to great effect.

Well, for one thing the platform now has more than 200 million monthly active users and 50% of them originate from the U.S. There are also more than 50 billion Pins, and a billion Pinterest boards, while users conduct more than two billion searches in the app every month.

A massive 87% of Pinterest users say that they’ve purchased a product or service because of the app, and 66% of all pins are related to some type of brand or product.

Combine those stats together and its plain to see, there’s a lot of potential in those Pins.

It’s also worth noting that while 70% of Pinterest users in the U.S. are women, 50% of international users in big markets, like Japan and Korea, are men.

What’s even better is that pins have a much longer marketing life than a normal social media post, because after you pin a post or a video, that content gets repined and continues to reap rewards in terms of engaging audiences and driving them back to your site.

With these stats in mind, let’s take a look at three examples of businesses that have used Pinterest in a targeted and effective way for marketing success.

Farmers Insurance is a great example of a company seeing success on the platform despite having nothing in common with the arts-and-crafts emphasis that’s made Pinterest famous.

The company realized that it could appeal to its audience by providing handy tips about topics such as traveling, making your home safer, and making vacations even more fun. Farmers’ posted content on Pinterest it named ‘Smart Boards,’ filled with easy-to-read tips that its audience would find valuable.

The takeaway is that Farmers’ realized that just posting boring old content about insurance wouldn’t get pinned on Pinterest, because people don’t find that stuff interesting.

Instead, Farmers focused on offering bite-sized nuggets of information that its audience could apply right away to improve some aspect of their daily life.

This is one way brands can leverage Pinterest, despite not having a highly visual product – by providing something that your audience can use to make their lives better. It doesn’t have to be something life-transforming, but it will, ideally, solve a problem or provide a solution to a common challenge.

Starbucks has always been a progressive-thinking company which solicits its audiences’ input on everything from new coffee flavors to the design of their stores.

The company’s Pinterest boards are no different, especially its Starbucks Cup Art Board, which features Starbucks cups that have been customized with audience artwork.

What makes this board so effective is that it allows Starbucks’ audience to feel empowered and connected to the brand by submitting their unique designs that people can pin over and over again.

The lesson here is that Starbucks recognized how important it is to allow its customers to feel like they’re a part of the company’s success – not just in the number of coffees sold, but in shaping and promoting the company’s inclusive culture.

By soliciting user-generated art, Starbucks created a forum for its audience to engage with the brand, and to generate comments from other followers.

Using this as a template, how can your brand involve your audience in a way that makes them feel connected and empowered?

For example, if you own a business that sells roller blades, you could ask your audience to post images of how they’ve customized their blades, and create a board to showcase examples.

Finding ways to engage your audience with your product or service in a way that makes them feel connected to your brand can generate lots of impressions on your Pinterest board.

One of the unique qualities of Pinterest is that it provides brands with the opportunity to offer inspiring, positive messages, which don’t necessarily have to be about a product or service.

MasterCard is a good example of a company that’s taken advantage of Pinterest to promote social good as one of its core values – the company’s recent #AcceptanceMatters campaign is a prime example of using inspiration to drive a brand message.

For years, MasterCard had run a marketing campaign that its card was accepted everywhere, but in this campaign, the company focused on ‘acceptance’ in a human way, meaning how we accept the differences that make us unique human beings.

MasterCard asked its followers on Pinterest to post why acceptance was so important, and their #AcceptanceMatters board was filled with beautiful word art that expressed the meanings of acceptance within society, creating powerful and emotional visual content.

The Pinterest campaign generated nearly 25 million impressions and 13,000 Repins in two months, and the company added a heap of followers to its board. 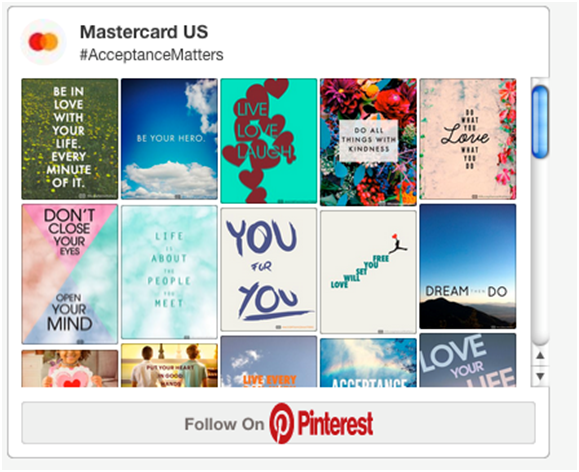 The lesson here is simple: Find a way to communicate a message that inspires and motivates your audience, while aligning with your brand mission.

If you’re a cosmetics company, for example, you could create a Pinterest board built around the theme of inner beauty, and ask followers to post what inner beauty means to them.

This could lead to a series of inspiring messages which communicate your core values without actually mentioning any of your products. That kind of messaging can deepen your connection with prospects and customers.

Make Your Boards Visual and Valuable

Pinterest is a great platform for companies that are able to create boards with content which utilize both visual appeal and provide audience valuable. You don’t have to be in the arts and crafts sector to take advantage of the marketing opportunities on Pinterest, but you do have to post content that’s valuable (solves a problem or provides an answer to a question), and visual (easy to understand in one glance).

If you’re able to harness the power of Pinterest, you can use it as another powerful tool in your social media marketing arsenal.