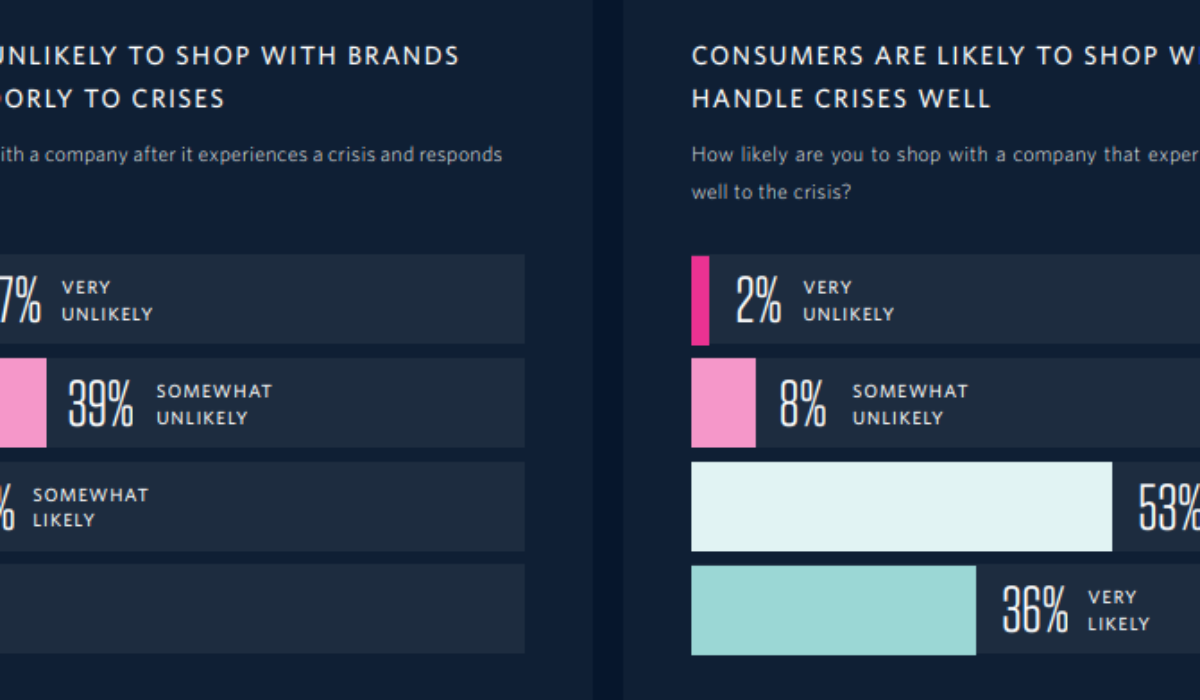 In our ‘always on’ digital world, your consumers are constantly watching you. If you don’t want to lose consumers in the event of any crisis, you should always properly respond to the crisis.

According to the 2019 Crisis Impact Report by Crisp, 90% of consumers say they are likely to shop with a brand that responds well to a crisis.

Being a small business owner, you cannot delay your response to any crisis. If you do so, you’re likely to lose your customers.

What Is a Crisis?

Needless to say, ‘crisis’ is a subjective word. It can have different meanings for different people.

Do consumers remember a crisis? The answer is Yes.

So you cannot afford to sit idle in any crisis thinking that consumers will eventually forget it.

Poor crisis response can be detrimental to your brand value. So if you want to build a big brand, you must appropriately respond to a crisis

66% of consumers are unlikely to continue to buy from the brand that doesn’t respond to a crisis properly, as the report finds. And brands that respond well to a crisis don’t lose consumers.

The Role of Social Media in Brand Crisis

With 2.82 billion users globally, social media plays a more influencing role in our lives than ever.

READ ALSO  In the News, a Survey Says 73% of Your Customers are Influenced by Content Marketing

People are more likely to share news of crisis on social media than they are to tell their friends or family members face-to-face, the report states.

And you will be surprised to know that negative and fake news travel faster than true stories on social media. This means people tend to share fake/negative news.

In short, social media can spread news quickly even if it is false, let alone the real crisis news.

As a small business owner, you should not only do proactive social media listening in any event of crisis but also keep tabs on social media to look out for fake news.

Emma Monks, VP of Crisis Intelligence at Crisp, said, Our survey data clearly demonstrates what consumers expect from brands during a crisis. However, the weaponization of communications on social media through things like deepfakes and troll farms, makes it difficult for brands to act on those expectations,”

“With this current landscape of misinformation and disinformation, it’s challenging for brands to even know what’s real or what’s fake, leaving them in a difficult position when it comes to executing an appropriate response that consumers want to hear,” She continued.

It goes without saying that social media has the power to make things go viral. Often, consumers know about a crisis through social media.

You can also use social media to your advantage. Acknowledging the situation and letting your consumers know that you’re addressing the crisis is a good way to manage the situation before it goes viral.

Not accepting the responsibility, not acknowledging the crisis, not being able to offer a solution to prevent a similar crisis, and failure to respond fast are the biggest mistakes brands can make while addressing a crisis.

When you’re crafting social media crisis response, you should:

In short, you should deliver fast, fact-based crisis response to your consumers.

Adam Hildreth, CEO of Crisp, said, “When responding to a crisis, brands need to be the first to know, so that they can be the first to act. However, they also need an effective combination of artificial and human intelligence to make sure they’re getting the right context to inform the next best action to take. By doing this, brands not only can exceed the consumer expectations outlined in our report, they can also drive stronger brand loyalty.”