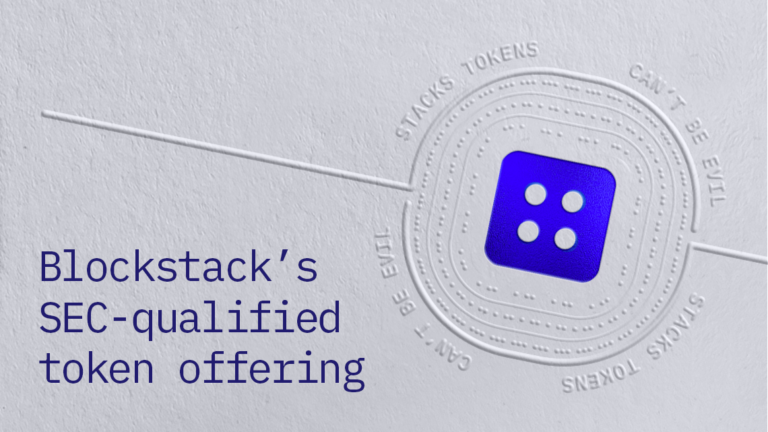 Blockstack PBC, a startup that has built a blockchain-based network for decentralized apps, Tuesday said it has raised $23 million in an initial coin offering historic as the first token sale to be endorsed by the U.S. Securities and Exchange Commission.

Approval for Blackstack’s ICO was granted under Regulation A+, established under the Jumpstart Our Business Startups Act, that allows for companies to raise up to $50 million in an alternative way to an initial public offering.

“Our goals for working with regulators in the States were twofold,” Muneeb Ali, chief executive officer of Blockstack said in a statement. “Primarily, we wanted to reach more retail investors who can be users of our network and have a financial stake in the success of our ecosystem. Secondly, we identified Asia as a priority market, and our SEC qualification added weight to our strategic move toward Asia.”

Blockstack isn’t new to raising money, having already gone down the ICO path before when it raised $47 million from accredited investors in a 2017 ICO under Regulation D of the Securities Act of 1933. The company has also previously raised venture capital funding from Union Square Ventures, Y Combinator, Lux Capital, Digital Currency Group and Naval Ravikant.

Tokens sold in the upcoming ICO will be distributed to investors within 30 days.

The company continues to grow, now reporting an additional 4,500 contributors to its Stacks ecosystem since July. The company offers a Dapps platform that is pitched as allowing users to be in control of their data and logins.

Although Blockstack’s offering isn’t that much different from other blockchain-based Dapps companies, it does continue to impress, not only through its fundraising efforts but the fact that it did so legally with SEC approval. ICOs are not as popular as they were in 2017, but Blockstack has now set legal precedent as to how they can be undertaken legally.