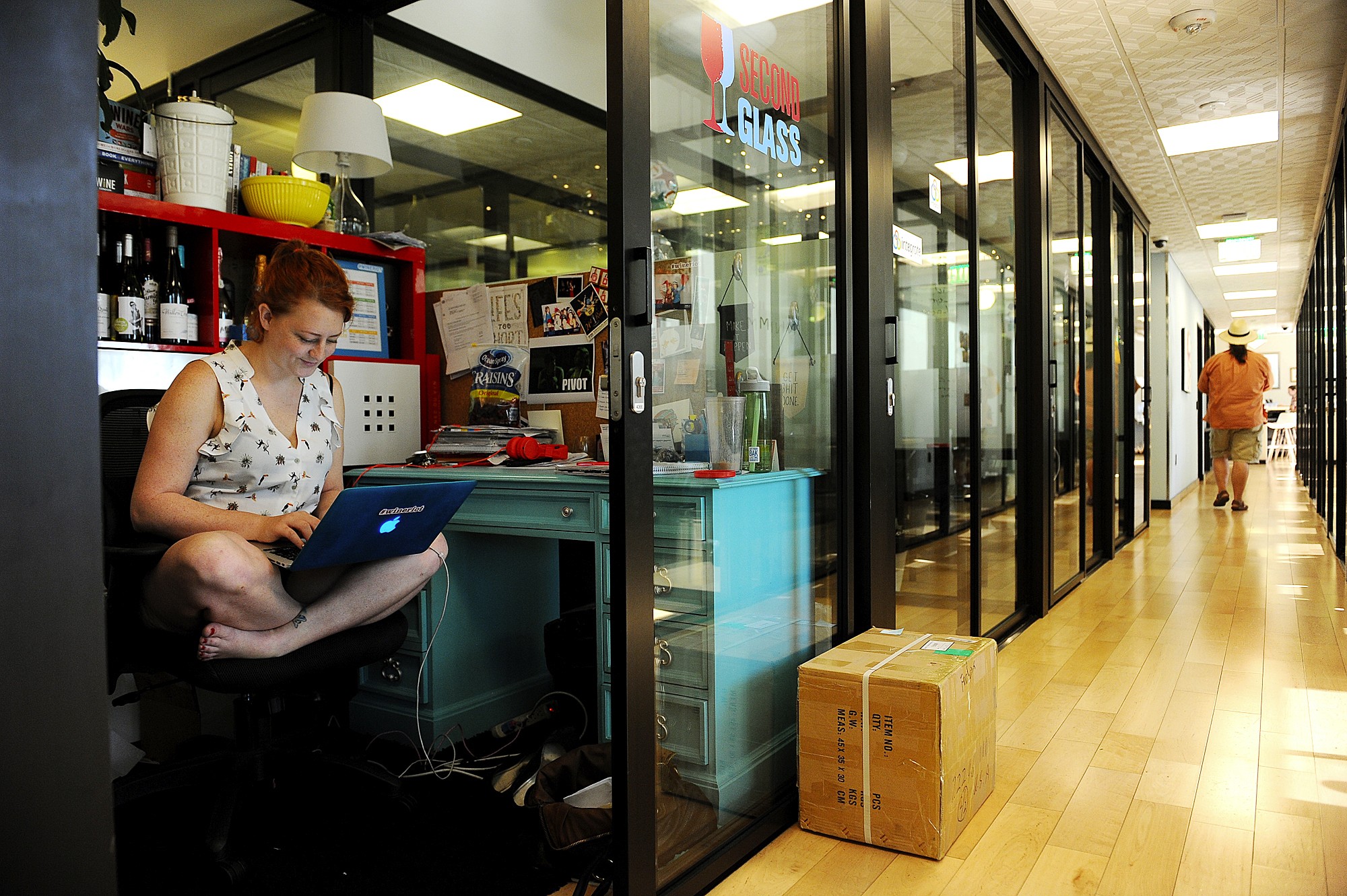 For all you killjoys and Cassandras looking for the apocalyptic end to Silicon Valley’s “unicorn” craze, WeWork is beginning to look like a godsend.

Until recently, the company looked like the most glittering unicorn in the high-tech herd since the heyday of Uber, with a private market valuation of $47 billion.

That might seem strange for a firm whose core business is subleasing office space, but WeWork dressed up that dull business model in a Cinderella gown of high-falutin’ rhetoric about how its mission isn’t merely to give office drones a nice place to plant their bottoms but “to elevate the world’s consciousness.”

Our mission is to elevate the world’s consciousness.

The WeWork mantra, from its SEC statement

Hearing this uttered by WeWork’s charismatic co-founder Adam Neumann, venture investors snarfed it up with solid gold ladles. It helped that the richest venture fund of all, Softbank’s Vision Fund, was a big investor.

WeWork seemed destined to a world-beating initial public offering as early as this month. Goldman Sachs, the lead underwriter, originally let it be known that the company could be worth as much as $65 billion after the IPO.

Yet in the last week or so, things seem to have come unstuck.

The current valuation for the company at the IPO has fallen to about $20 billion, possibly even $15 billion. Doubts about whether the IPO will happen on schedule are mounting.

That could be a positive sign, if it means that irrationality is finally being burned out of the venture investing environment. For the last few years, the willingness of venture capitalists to fund losses until they could exit their positions via a profitable IPO has fueled preposterous private market valuations, creating a herd of “unicorns” — companies with valuations of a billion dollars-plus.

Some of those highly anticipated IPOs have turned out to be busts, so far. The ride-hailing company Uber, the original uber-unicorn, which was valued as high as $70 billion, went public in early May at $45 and recently has traded at about $34, for a market value of $56 billion. Its rival Lyft went public at $72 at the end of March and has recently been trading in the mid-$40s.

Softbank reportedly has pressed for a postponement of the WeWork IPO, according to Bloomberg. WeWork also is being pressured to rework its loose-limbed corporate governance, which also has raised the hackles of potential public investors, though the details are unknown.

The company has a three-class stock structure in which two classes, with 20 votes each, belong to Neumann and his associates. The third class, which would be sold to the public in the IPO, has only one vote per share. The arrangement gives Neumann unassailable control over crucial corporate policies, according to the company’s IPO registration statement, filed Aug. 14 with the Securities and Exchange Commission.

Indeed, Neumann’s control could extend from beyond the grave, since in the event of his death his supermajority shares would transfer to people he designated without any dilution of their voting power. “You may not agree with the decision of our management and will not have the opportunity to influence our decisions,” the registration statement warns investors.

READ ALSO  Why are these parents bringing up children tech-free in Silicon Valley?

Supermajority control vested in founders isn’t unusual in tech; it’s a feature of companies such as Facebook, Google and Snap. In this case, however, its drawbacks are magnified by the manifold peculiarities of WeWork’s relationship with Neumann.

Start with the company’s recent rebranding as “The We Company.” (For clarity’s sake we’ll continue to refer to it as WeWork, to distinguish the “We” trademark from the traditional usage of “we” meaning “us.”) The company wrapped this rebranding in a typically rococo episode of self-dealing in which Neumann, 40, sold the “We” trademark to his own company for $5.9 million in WeWork stock.

WeWork later unwound the transaction “at Adam’s direction” (perhaps the doubts it inspired in the investor community had something to do with the decision), leaving Neumann holding 0.03% less of his company and a general impression in the market that neither he nor the WeWork board had any scruples whatsoever.

Over the last few years, WeWork leased four properties from Neumann to use for its subleases. Neumann leased three of these properties to his own company on the very day he acquired them, and the fourth within a year after he acquired it. WeWork has paid Neumann a total of $20.9 million for the properties thus far, although it has received “tenant improvement reimbursements” of $11.6 million from him in return. But WeWork still owes Neumann an amazing $236.6 million in “future undiscounted minimum lease payments,” according to the registration statement.

WeWork also has been a fount of cash for Neumann to borrow, at enviably low rates. In 2013 and 2014, the company lent Neumann’s WE Holdings three-year loans totaling $25.4 million at 0.2% a year. The loans were collateralized by WE Holdings’ shares of stock in WeWork, and were repaid by WeWork’s repurchase of the shares.

In June 2016, WeWork made another $7 million loan to Neumann at 0.64% annual interest; he repaid the loan in full, including $100,000 in interest, in November 2017. These were deeply under-market interest rates in a period when the prime rate — typically charged to a bank’s most creditworthy customers, ranged from 3.25% to 3.5%.

Much of the company’s registration statement appears to be designed to suggest that its 29 pages of “risk factors” don’t matter. WeWork is a real estate arbitrage company dressed up as a high-tech, new age unicorn by claiming to have a disruptive model for buying and leasing office space to sublet to tenants.

“We provide our members [that is, tenants] with flexible access to beautiful spaces, a culture of inclusivity and the energy of an inspired community, all connected by our extensive technology infrastructure,” its registration statement says. “We believe our company has the power to elevate how people work, live and grow.”

Such verbiage comes right from the Silicon Valley IPO playbook. It’s reminiscent of Google’s IPO mantra “Don’t Be Evil,” and Facebook’s mission statement that “it was built to accomplish a social mission — to make the world more open and connected,” and Snap’s claim that “reinventing the camera represents our greatest opportunity to improve the way people live and communicate.” Uber’s IPO mantra was “We ignite opportunity by setting the world in motion.”

This sort of flapdoodle is old hat by now. Investors surely know that it’s meaningless against the backdrop of profits and losses, or at least without a plausible path to profitability.

The key point to keep in mind about WeWork, when the baroque dealmaking and new age blather is backed out, is that its business model seems almost to be begging to blow itself into smithereens. Boiled down, it amounts to WeWork acquiring office space in bulk via leases with an average term of 15 years, and subleasing it out via tenant contracts (excuse me, “memberships”) with average terms of 15 months. WeWork acknowledges that “in many cases, our members may terminate their membership agreements … upon as little notice as one calendar month.”

Aficionados of economic history will recognize that the mismatch of long-term liabilities and short-term assets underlies pretty much every financial crash ever, including the crash of 2008. In this case, a downturn could result in WeWork’s tenant base evaporating, leaving it on the hook for lease obligations it estimates at $47.2 billion. WeWork tries to put rouge on this ogre by stating that in a downturn, after all, the cost of leases and construction will be lower.

Real estate experts unsnowed by WeWork’s touchy-feelism don’t buy this. One is the Chicago-based entrepreneur Sam Zell, who told CNBC this month that he had invested in a similar subleasing company once and has the scars to prove it. “Every single company in this space has gone broke,” he said. “Why is this any different?” During the period he owned Tribune Co., then the parent of The Times, Zell may have shown himself to be singularly maladroit as a newspaper proprietor, but there’s no point pretending that he doesn’t know real estate.

Nor is WeWork’s model anything new. Back in the 1970s, for example, there was Los Angeles-based Attorneys Office Management, which provided small-time lawyers with offices equipped with receptionists, clerical staff and law libraries they couldn’t afford on their own. The spaces were known as “Fegen Suites” after the firm’s chairman, Paul Fegen (pronounced “fee-jun”), an attorney. But the company went bankrupt in 1983 during a real estate crash. Fegen was later disbarred for mishandling several client accounts and has since resurfaced as a professional magician.

It’s not entirely inconceivable that WeWork has broken a code that remained opaque to Fegen and the real estate types familiar to Zell. Neumann certainly wins paludits as a salesman. As my colleague Roger Vincent reported in May, some big office space developers have taken a look at WeWork’s business model and done it the ultimate compliment of copying it — offering tenants more flexible leases and occupancy amenities.

That’s not great news for WeWork, because it underscores that in real estate, there’s nothing new under the sun, or at least nothing that can’t be replicated. Indeed, even without competition from old line real estate firms, WeWork faced competition from other venture-funded office rental firms.

But the doubts about the pending IPO suggest that the investment markets may finally have gotten wise to the limits of IPO mania for companies with a high-tech gloss but low-quality financial metrics. WeWork may be offering not magic like Fegen, but alchemy. And alchemy’s heyday was centuries ago.