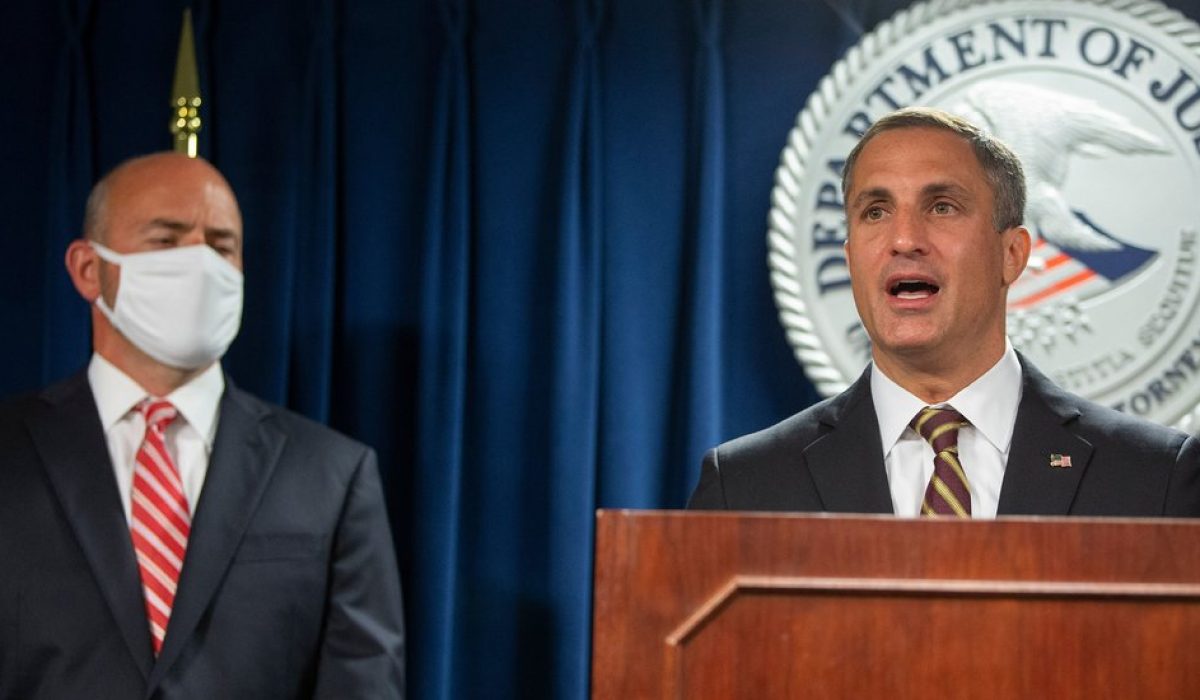 BOXBOROUGH, Mass. — Six eBay employees mounted a cyberstalking campaign — including sending boxes of live cockroaches and a Halloween mask of a bloody pig’s face — against a couple who ran an online e-commerce newsletter, according to charges filed by federal prosecutors on Monday.

Unhappy with the newsletter’s coverage of eBay, the employees, none of whom now work at the company, barraged the couple with threatening emails and sent disturbing deliveries, including a funeral wreath and a book on how to survive the death of a spouse, said Andrew E. Lelling, the United States attorney for Massachusetts, in a news conference on Monday. Several of the employees drove to the couple’s home to spy on them, he said.

“They were not merely unhappy, they were enraged,” Mr. Lelling said, describing how one former eBay executive told a fellow executive in a text message that he wanted to “crush” the woman in the couple, who live in Natick, Mass., a Boston suburb. The result, Mr. Lelling said, “was a systematic campaign, fueled by the resources of a Fortune 500 company, to emotionally and psychologically terrorize this middle-aged couple in Natick with the goal of deterring them from writing bad things online about eBay.”

Also charged in the case was a former senior manager of special operations for eBay’s global security team, who is a former police captain, according to the complaint.

In a company post on Monday, eBay said it had fired all the involved employees last year, including the company’s former chief communications officer. EBay also said that an internal investigation had examined whether the company’s chief executive at the time, Devin Wenig, had played any role in the cyberstalking campaign.

“The internal investigation found that, while Mr. Wenig’s communications were inappropriate, there was no evidence that he knew in advance about or authorized the actions that were later directed toward the blogger and her husband,” the statement said. It added: “However, as the company previously announced, there were a number of considerations leading to his departure” from eBay.

In a statement emailed to The New York Times, Mr. Wenig said: “As confirmed by the company following a thorough, independent investigation, I did not direct or know anything about the acts that have been charged in Boston. I have spent my career defending press freedoms. What these charges allege is unconscionable.”

Lawyers representing Mr. Baugh and Mr. Harville did not immediately respond to requests for comment.

The prosecutors did not name the couple or their newsletter.

The stalking campaign began in the summer of 2019 after the newsletter published an article about a lawsuit involving eBay, prosecutors said. EBay executives followed the newsletter’s posts closely, often “taking issue with the content” as well as anonymous reader comments disparaging eBay executives as “liars” and “delusional,” the complaint said.

In response, one company executive wrote to another saying the newsletter editor was “out with a hot piece on the litigation. If you are ever going to take her down … now is the time,” according to text messages included in the complaint. The other executive responded: “Let me ask you this. Do we need to shut her entire site down?”

A few messages later, the first executive commented: “She is biased troll who needs to get BURNED DOWN.”

Prosecutors said the executives behind those messages — who were not named or charged in the case — pressured other employees to do something about the newsletter’s editor. The people charged in the case then began a three-pronged campaign. Several eBay employees sent “unwanted and disturbing deliveries” to the couple’s home, the complaint said, including a preserved fetal pig, fly larvae, live spiders, a sympathy funeral wreath — and pornography that was addressed to the couple by name, but sent to two of their neighbors.

The employees also sent a series of increasingly aggressive direct messages on Twitter, asking the newsletter editor what her problem was with eBay, the complaint said. The court filing said they followed up with threatening messages, culminating with publishing the couple’s home address.

As an excuse to covertly surveil the couple in the home, the complaint said, two employees also registered for a software conference in Boston in August, and, lest they were stopped by the police, went to the couple’s house carrying false documents purporting to show that they were investigating the publishers for threatening eBay executives.

The couple spotted the eBay employees spying on their house, however, and called the police, who contacted eBay for assistance.

As the police and eBay began to investigate, employees involved in the cyberstalking campaign lied to the police, as well as to eBay’s lawyers, and deleted evidence of their involvement, prosecutors said, obstructing the federal investigation.