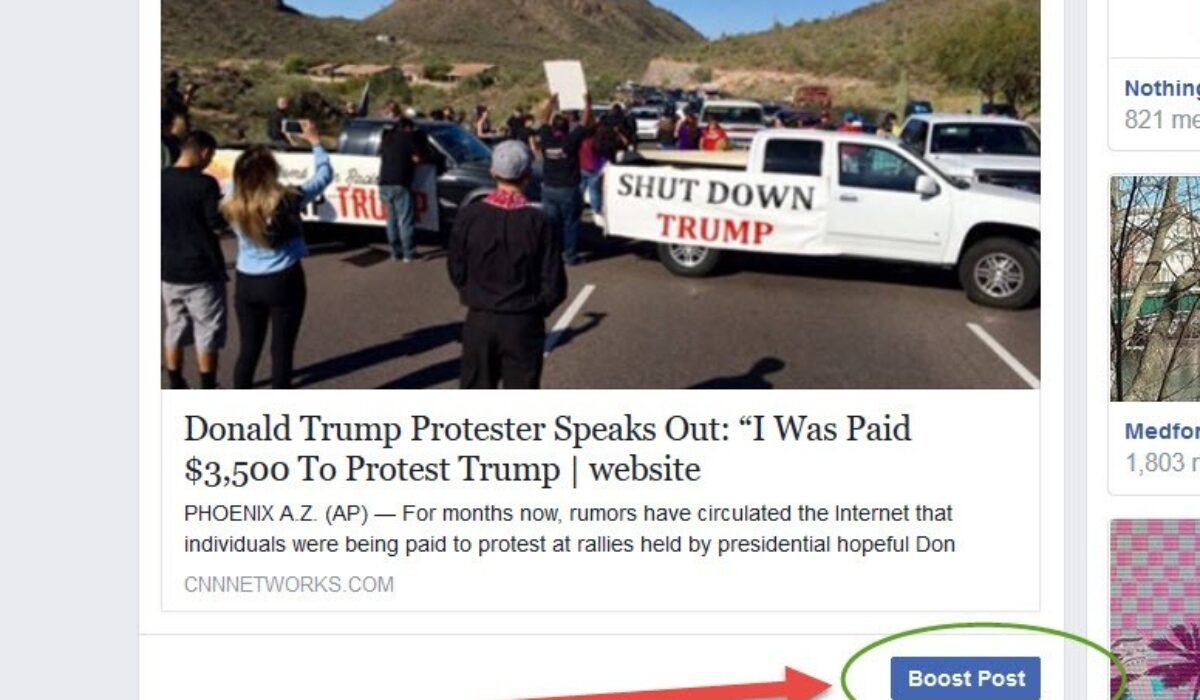 Recently, I ran an experiment to see if it’s still possible to become a fake news media mogul on Facebook, nearly an entire year after the 2016 US presidential election which first brought attention to this issue.

TL/DR: the entire effort took less than an hour of work and just $50 dollars of Facebook ads. The results were appalling.

It isn’t every day that my profession (Facebook and internet advertising) makes international headlines, so today I’ll provide a comprehensive overview of the Russian’s Facebook advertising playbook for fake news.

Let’s get to work.

This is super easy:

This is a completely fake article.

The reason for using a well-known fake news story and a ridiculous-looking website was to make it super-easy for Facebook to recognize the fake news.

This is also ridiculously easy to do. Go to Facebook. Create a fake company page. Upload your fake logo and fake news stories, like this: Step 3: Create a Facebook Ad, Promoting the Fake News on Your Fake Page Next, we need to target the Facebook ad to people who we think will likely be interested in seeing it.

Donald Trump and Hillary Clinton spent a combined $6.8 billion in their respective bids to become president in 2016. But the U.S. election is remarkably easy (and cheap) to hack. That’s because the outcome of presidential elections often hinges on just a few thousand votes (just 11,602 in Michigan, for example) in key battleground states, as we saw in 2016.

To hack an election, you’d probably want to target the swing states of Michigan, Pennsylvania, and Wisconsin, all of which had reasonably close outcomes. Had all three gone the other way, we’d have a different President in office today.

Next, you have to target the Facebook ad to people who you think will be interested in seeing it. For optimal effectiveness, you have to utilize “Detailed Targeting” corresponding to the interests and demographics of the people we think will eat this stuff up.

Based on this criteria, Facebook has identified 4.4 million people. Their suggested ad targeting criteria is fantastically granular:

Once you’ve done that, specify a budget (e.g., $50 for this experiment) then click “Place Order”.

Within minutes of placing the order, the ad was approved and my Notifications pane lit up with alerts of people engaging with my fake Facebook ad. The comments were quite engaging:

Every Facebook ad is given a Relevancy Score – a number between 1 and 10 that basically works as its ad quality rating system. This is how Facebook grades your ad performance.

Facebook rewards advertisers with highly engaging ads – if a high percentage of people engage with sponsored Facebook content, the reach (or visibility) of that campaign will be even greater, while the amount the advertiser pays will be lower.

Facebook’s ad platform assigned this ad a score of 7 out of 10 (pretty good marks) for my fake news campaign.

Why? Because fake news pushes buttons – it gets people all worked up. People can’t resist engaging with the content.

Over 6% of people who saw the article engaged with it. This meant that I could generate post engagements for a relatively low cost of $0.23 per post interaction (e.g., clicks to the article, Likes, comments, post re-shares, etc.).

All in, it took about an hour to set up my fake news operation on Facebook.

I paid an average of $0.23 to drive hundreds Facebook engagements, such as likes, clicks, comments and shares.

When users engage with a sponsored post, it creates a free snowball (or multiplier) effect, as follows:

Repeat this cycle a few times and a hot fake story can start trending on Facebook. Like gravity, fake news just needs a little push (even just a few dollars in Facebook ad spend) to get the ball rolling. Once set in motion, millions of people can end up seeing this stuff for very low cost.

Typically, we observe this snowball effect (or multiplier) to extend the reach of a catchy sponsored post by 2–10 times – for free.

While Facebook has recently disclosed that 10 million people were exposed to Facebook ads from Russian operations promoting fake news, our analysis leads us to believe the total reach, including unpaid visibility and engagement via this snowball effect, would have likely been somewhere between 20 to 100 million people.

Data Analysis: The Shockingly Low Cost of Buying an Election

We took our example data and plugged in two additional variables:

Based on this data we computed the cost to reach and the cost to engage with a number of people equal to the margin of victory in the swing states of Wisconsin, Michigan and Pennsylvania using Facebook Ads and fake news, as follows:

Minutes after the campaign exhausted its budget, this receipt was sent to me by email. a) It’s still way too easy to become a fake news publisher on Facebook. They have a monopoly on determining the news that people see, and have become a de facto news source. We regulate the other ad venues like radio and television via campaign finance laws. Facebook claims to have done work in combating fake news issues, but very big loopholes remain wide open today (my experiments were conducted on October 6, 2017.)

c) Fake news is effective. Facebook claims that their ads can have a profound impact on a user’s searching and purchasing behavior, so it’s not hard to imagine that they could also impact voting behavior, and even an election outcome through targeted campaigns in battleground states (where the margin of victory was just a few thousand votes). Facebook ads were, and remain to this day, a highly effective vehicle for the distribution of fake news intended to alter public opinion both in the USA and in other countries worldwide where Facebook advertising costs are substantially lower.

Fake news via Facebook Ads is not a US partisan issue, as fake news can come in any form. It exploits incompetent/greedy platforms, algorithmic loopholes and gullible users to amplify divisions within society and is a threat to global democracy.

A version of this post was first published on Medium.