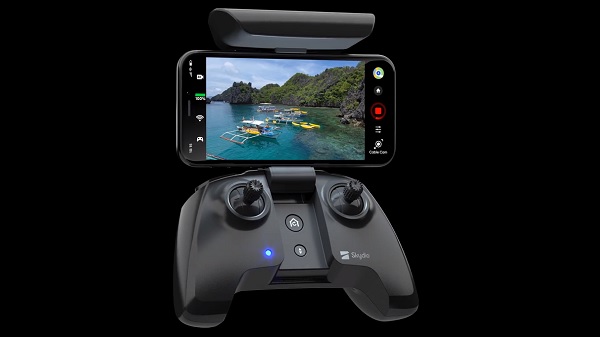 Skydio today announced the the “Skydio 2” smart drone. It’s a feature-packed ‘flying film crew’ capable of navigating through forests, over water, and at speeds of up to 38MPH.

I reviewed the company’s first drone, the R1, and my jaw’s still on the floor. There’s nothing else out there like a Skydio drone. Most drones fall into the “remote control vehicle” category, the R1 and Skydio 2 are better described as robots.

They rely on computer vision to effectively see in every direction. And both use a proprietary AI system to avoid crashing, perform aerial cinematography maneuvers, and follow people and vehicles. The Skydio 2 features six 4K cameras and flies at up to 38MPH.

What this means is that you can turn on a Skydio drone, toss it into the air, tell it what to film, and then walk, run, bike, or drive away. Simply put, it’s a flying camera that pilots itself and follows you around, like a robot buddy who exists only to film things for you.

The Skydio 2 improves on the original in nearly every way. It’s small enough to fit anywhere a 13-inch laptop will, the AI engine has been upgraded to handle any terrain, and it now has several different control methods.

The R1 was mostly just an autonomous robot, which is awesome. But sometimes rather than trying to think of something epic to film, I just wanted to go outside and play with a drone. You can’t really “pilot” the R1. It doesn’t come with any kind of remote control, so all you can do is position it with the app by tapping on your phone. The Skydio 2, on the other hand, has two remotes – one of which will be sold separately.

One’s a remote control reminiscent of standard drone remotes and the other is a nifty GPS “beacon” control.

The Skydio Beacon lets you operate the Skydio 2’s autonomous features via remote, and it’s also a literal GPS tracking beacon for the drone. That means it can follow you from up to 1.5 km (nearly a mile) away even if it can’t see you. That’s something no other drone that we know of can do.

When using the traditional remote, you’ll have near-full control over the drone. I say ‘near-full’ because it’ll actively avoid objects even if you steer it towards one. I haven’t used the Skydio 2 yet, but the R1 is amazing at collision avoidance. It follows that ‘piloting’ the Skydio 2 will probably feel like a combination of manual control and using the Force.

The Skydio 2 is expected to ship in November with a limited stock available in 2019. It’ll retail for $999 and you can reserve yours now with a $100 deposit.