Embedded systems were systems that basically had a fixed function and were a part of a larger system of devices. These could be anything from an MP3 Player (simply built to play music) to something as complicated as the Apollo Guidance Computer built for the Apollo program back in 1966.

After that, there would be a series of hurdles that both Microsoft and its customers would face until the software giant would discontinue its mobile operating system dreams and join Google Android with a new mobile device announced just a few days ago.

So let’s start from the beginning However, in 1996, Windows CE would power handheld PCs that were more like pocket computers and less of mobile phones. These devices usually had a monochrome display with a rather pixelated resolution of 480×420 pixels. Back then the HP 320 LX was the talk of the town, with a 640×240 resolution display that even supported a stylus using its touchscreen. It weighed around half a kilo and packed in just 5 MB of internal storage, which back then seemed like plenty.

Windows CE was followed by Windows CE 2.0 a year later, which basically allowed manufacturers to run them on a variety of devices. The update also added support for VGA displays that now supported 256 colours (we are at 16 million colours today).

Codenamed ‘Rapier’ the OS was released on 19 April 2000. It was based on Windows CE 3.0 and was basically the closest thing to a smartphone that Microsoft came up with back in the day.

The Pocket PC was basically the evolution of Microsoft’s handheld PCs to what was almost a smartphone with an operating system. It could also run apps and came with built-in apps like Pocket Word, Pocket Excel, Pocket Outlook and a note-taking app called Notes that could also save handwritten notes created by using the stylus.

Remember PC maker Compaq? Pocket PC fans will remember the Compaq iPAQ H3100 here which one could also buy in India. It was chunky (even at 163 grams) but came with a Today screen where users could glance through schedules for the day ahead and basically edit Word doc and more. Just that it still was a PC, meaning you still needed a regular feature phone at hand for placing calls. Clearly, this was more of a productivity device and was not for the regular consumer.

Around the early 2000s, Nokia was leading the way on the consumer front but was still stuck with feature phones and monochrome displays. The Nokia 5510 was pretty cool with a physical keypad and could play MP3 files.

Nokia even launched purpose-built phones like the 5510 during that time, that focussed on texting and music with a physical keyboard and a built-in MP3 player. The 9210 Communicator still featured a monochrome display so you were possibly better off with a Pocket PC-powered device if you wanted something flexible to work with on the move.

Microsoft finally released Windows Mobile 2003 (which was still built on Windows CE 4.2) and this software resulted in the first class of devices that could be tagged as smartphones that we know and love today.

They offered 16-bit colour displays with touchscreens (and a D-Pad for navigation) and packed in a healthy 64 MB of internal storage.

Windows Mobile also spawned a class of devices (which ran Windows Mobile 6.0 Standard) that did not need a touchscreen and could work with a D-pad and a physical keyboard. These were the heydays of the Palm, HTC and Windows Mobile after which things turned a bit sour, all thanks to Steve Jobs and the iPhone. With Windows Mobile 6.0, smartphone manufacturers who were stylus-happy till then went on a mission to compete with the iPhone. And with that was the end of creative smartphone design and the dawn of the candy bar smartphone era, where every other phone, mimicked the design of the iPhone for the next couple of years.

There were still a gutsy few in the industry like HTC and Sony Ericsson that challenged the norm and launched some crazy-looking smartphones like the Xperia X1 with slider-arc design that featured a big touchscreen and a slide-out physical QWERTY keyboard. Microsoft’s Windows Mobile stole the limelight for a while until the iPhone became more popular. And then in 2009, Android showed up.

Windows Mobile 6.5 was soon out and the highlight was finger-friendly touch interactions (hexagonal tiles) all thanks to Apple’s iPhone that was still growing in popularity, regardless of its mobile OS called iOS, which was still fresh and new. Another big announcement around this time was the Windows Marketplace for Mobile. On launch day the Marketplace had 246 applications in the store, which is pretty good even by today’s standards for a brand new OS.

Windows Phone 7 shook up the world of smartphones in more ways than one. It was a massive leap in what many thought a smartphone could be, changed the way we looked at notifications and even introduced a brand new UI design language called Metro UI, that was completely different from what the world had ever seen before.

I may be a bit of a fanboy here but, Windows Phone 7 was quite different from what most of us imagined a smartphone OS to be, which was a primarily a bunch of icons on that opened up apps (in many ways this sadly is still the case with Android and iOS even today). Windows Phone 7 introduced a Live Tiles-based notifications system along with an almost magazine-like app UI (with hubs) that seemed intriguing enough for even hardcore Android fans like your truly, to switch over to an HTC HD7 and give Windows Phone a go.

Microsoft also had its own set of hardware requirements for manufacturers to qualify to run its operating system. There needed to be 5 physical buttons: Back, Start and Search on the front, along with camera and power buttons on the sides and even had control over which CPU and displays needed to be used for the best experience.

And for a while it worked really well.

But that ‘7’, in Windows Phone kind of hit back eventually. You see, Windows Phone 7 was still based on Windows CE a base that was designed and improved over time, but Microsoft’s desktop operating system had moved on, which is where the problems began to pop up when it came to integration and compatibility between desktop and mobile.

In 2012 came Windows 8 which too was a massive overhaul for Microsoft’s Windows operating system and was a big departure from Windows 7 with a tile-based, minimalist interface Windows fans love and use today.

It was built on the Windows NT kernel and this was the sole reason Windows Phone 8 too had to jump on to the same, which lead to a few problems for early adopters.

Unified desktop and mobile apps, was good news for third-party developers, and for Windows Phone 8 users. But the switch between kernels meant that older smartphones would not be able to run the new apps and Windows Phone 8, which came with a ton of improvements over Windows Phone 7. The risky move was the first blow to newly converted Windows Phone fans who had purchased a brand new smartphone (with 512 MB of RAM) that could not be updated to the next milestone update a year later. Still, the improvements that came with Windows 8 and later 8.1 (NFC support Multitasking, and then Action Center and Cortana) were good enough to convince more customers to buy a Windows Phone or upgrade to one that supports the new operating system.

But the elephant in the room were the apps. While Windows Phone 8.1 saw more apps than ever, Android and iOS had grown by leaps and bounds. Google too did not want in and refused to build any apps for the platform which forced potential Android upgraders to even consider a Windows 10 Mobile smartphone. Moreover, there were fewer takers for Windows Phone-powered devices, and this was a good enough reason for many developers to let go of the platform.

Windows changed its OS branding with next milestone update and called it Windows 10 Mobile keeping in line with Windows 10 on desktop. This was a do it or die situation for Microsoft’s mobile operating system that was now facing constant criticism for the lack of third-party apps in its Windows Store including popular apps from Google like YouTube, Maps and more. Microsoft even introduced Project Astoria, that would help third-party developers easily port Android for Windows 10 Mobile with minimum tweaking. But the Android/iOS duopoly turned out to be too strong for anyone to even bother developing apps for Windows 10 Mobile, which would now also work on Windows 10 on the desktop thanks to the new Universal Windows Platform (UWP).

We have tried VERY HARD to incent app devs. Paid money.. wrote apps 4 them.. but volume of users is too low for most companies to invest. ☹️ https://t.co/ePsySxR3LB

The software giant finally called it quits in 2017. Microsoft’s Corporate Vice President, Joe Belfiore, a man who was literally in charge of Windows Phone and Mobile, announced that due to low market share and the severe lack of support from third-party app developers Microsoft would no longer sell Windows 10 Mobile devices. Users of existing devices would continue to receive security updates and bug fixes.

Around that time, however, CEO Satya Nadella had hinted about the shape of things to come in an interview, “I’m sure we’ll make more phones, but they will not look like phones that are there today.” And going by what happened a few days ago at Microsoft’s Surface event, all the plans went as expected.

The future with Android

Earlier this year, Microsoft announced that all Windows 10 Mobile devices will stop receiving updates and lose support after 10 December 2019. And that’s the end of the line for Windows.

But  Microsoft had another trick up its sleeve. Since 2012, Microsoft like Google had started building its own hardware. And year after year, there were plenty of improvements to those premium products. The Surface lineup became quite popular soon enough everyone wanted to know whether we would soon see a Surface phone. Oddly, even with so many versions of its mobile operating system out, Microsoft had yet to launch its very own smartphone.

Well, that just happened a few days ago, and it’s clear that Microsoft has learned its lesson when it comes to mobile operating systems (which Nokia too learned the hard way).

And that’s exactly what Microsoft did. Just a few days ago, Microsoft announced it long-awaited and much-rumoured Surface phone and it’s called the Duo. It’s a rather futuristic-looking device given its slim appearance and dual-displays joined by a hinge that lets one fold the device into half its size. But more importantly, it is powered by Android and not Windows and comes with the Google Play Store on board. Developers will still have to tweak their apps a bit to make full use of this heavily customised compatible fork of Android (like Samsung’s OneUI). But for buyers of this premium device, there will still be peace of mind knowing that they have access to the entire library of Android apps and games, something which Windows Phone users never did. 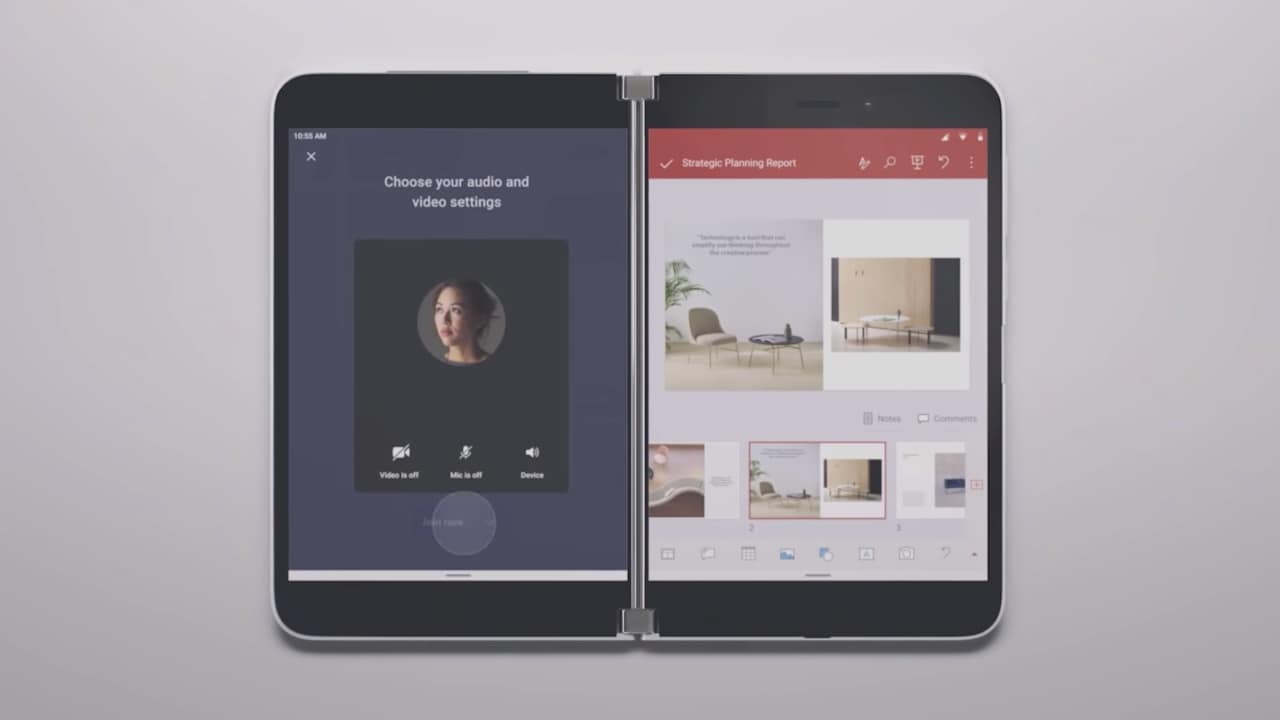 I believe that Microsoft did the right thing by launching its first Surface phone with Android inside and it made plenty of sense to wait over the years as well. You see, if Microsoft took the standard candybar layout that thousands of Android smartphones already have, it would not really warrant the need to buy a Microsoft-made, Android-powered smartphone.

It simply would not be special enough.

But now that we are in the era of foldables, with Android experimenting with new form factors and Apple losing its grip with its iPhones (that have gradually stagnated over the years), it makes plenty of sense for Microsoft to launch the dual-display Duo in 2020 and running Android apps makes for an even stronger case that it will succeed.