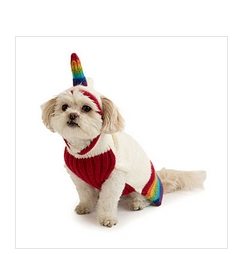 “A picture is worth a thousand words.”

Many of us conclude that pictures make words unnecessary. We believe images are so explicit and clear that they communicate fully on their own.

Too often that’s not true, however. Whether of people or products, photos can be more ambiguous than most people assume. And that’s one reason it’s important for words — in the form of a caption — to accompany photos, charts, or other graphics on your site.

If the cute dog picture below from UncommonGoods caught your eye, you might be unsure of the offer. The caption, “Unicorn Pet Sweater,” though, clarifies that the dog pictured is modeling a colorful garment that dresses it up like a unicorn.

Only with the caption can the reader be sure of the offer. Source: UncommonGoods.

Here’s another product picture example from a site called the Nerdy Nurse. We can see that these are blue clothespins with nursing-related symbols on them. But did you pick up from the photo that the clothespins are also magnets? Again, the words “Nurses Clothespin Magnets” in the accompanying caption clarify what’s being sold — not the photo. 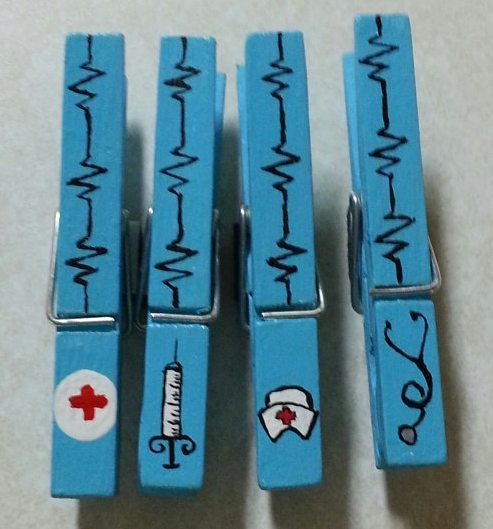 This photo depicts nurse-themed clothespins. But it’s not obvious just from the photo that the clothespins are magnets. Source: TheNerdyNurse.com.

A vague caption can create even more confusion. For example, a flat image of a CD cover could be representing a CD, an audio download, a DVD, a streamed movie, or a book with a square shape. Careful wording is needed to vanquish doubts in the mind of the shopper.

Keep in mind too that product photos don’t necessarily reveal their scale, which can send shoppers’ minds spinning with questions.

In the snippet below from Beoplay.com, a seller of audio equipment, nothing in the photo or the product description describes the size. Is the diameter two inches or ten inches? A shopper has to click on the “tech spec” link to answer that question. Beoplay could eliminate questions about size with a photo containing, say, a hand or with a caption such as “For Audiophiles, the Beoplay A1 Traveling Speaker Fits in the Palm of a Hand.”

Neither this photo nor its initial product description indicates the item’s size. Source: Beoplay.com.

And a skillfully written caption also gives you an opportunity to hit home an important point about a product. Notice the difference in these pairs of captions on a site for home-schooling parents and a swimwear outlet, respectively.

Finally, photo captions and alt tags are critical for visually impaired shoppers who rely on screen readers. According to the Centers for Disease Control, around 3 percent of Americans aged 40 or older are visually impaired or blind. As shopping shifts online, we can expect more legal challenges to ecommerce sites that are inaccessible to this population.