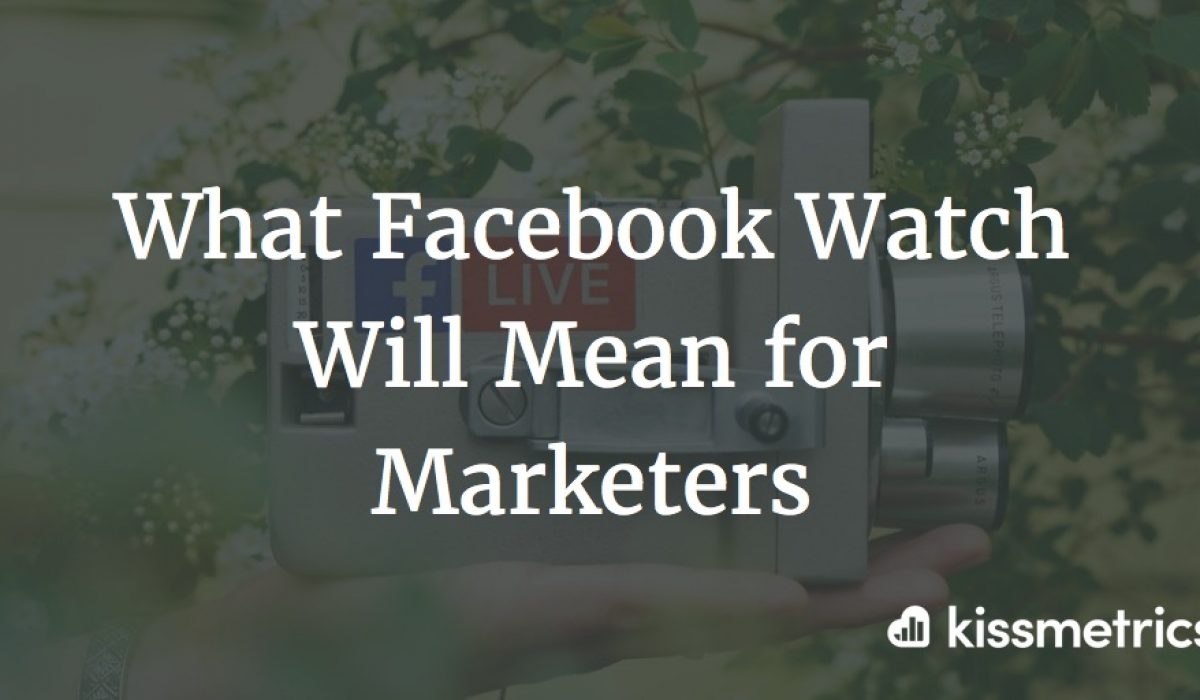 It was only a matter of time.

What is Facebook Watch, and what does it mean for you your marketing strategy?

Launched in August 2017 to select users in the U.S. via mobile, desktop and TV apps, Facebook Watch is the company’s entrée into episodic streaming video. Videos range from mini documentaries to live sporting events, courtesy of partnerships with Major League Baseball. There is a set group of publishers at launch, but the company plans to open it up to more creators soon. What makes Facebook Watch different from other streaming services?

The streaming video space is undeniably crowded, so Facebook had to find a way to make Facebook Watch stand out. There are three main ways Facebook Watch is different, all of which bode well for its staying power.

Facebook Watch’s personalization takes advantage of everything users already love about the platform – it’s personal, and it’s social. People love getting recommendations for the things they love, and they love sharing those things with friends.

For example, in April of this year, Tumblr launched its video chat service Cabana. The app functions like a Tumblr/FaceTime hybrid, where users can watch their friends’ reactions in real time as they all watch a video together. Social viewing veteran YouTube has been making some changes, too. Also in August, YouTube added in-app chat to its Android and iOS apps. Previously, users could only share videos out to other apps, such as Twitter or text message, but now conversations can also happen natively within YouTube. The interface is similar to Google Hangouts and appears to be YouTube’s answer to the messaging functionality offered by Instagram and Snapchat. When multiple social media platforms follow suit, it’s a sure sign a new trend is here to stay. Social viewing is not going away, so how can marketers take advantage of it?

Facebook has 1.32 billion users who check in on a daily basis. For anyone who’s wondering, their monthly active users just hit 2 billion.

Either number means Watch is a major initiative at Facebook that marketers should not ignore. Facebook plans to integrate Watch episodes into the News Feed, and the company has a track record of using the News Feed to drive new features to success.

Here are four ways Facebook Watch will change the game for marketers.

In an increasingly internet-marketing-savvy world, people are getting better at tuning ads out. Just last year, Google gave up on its right sidebar ads and removed them.

Fortunately for advertisers, Facebook Watch promises great things. There’s a lot of noise in a Facebook user’s News Feed, so it’s not always easy for your ad to grab attention. But with video, you have a captive audience who is stuck watching your ad. They can’t simply scroll down their feed to get away from it.

Longer videos will only increase the effectiveness of ad break mid roll ads. And if Facebook adds social engagement functionality within the ads themselves, such as reactions and sharing, they’ll perform even better.

Traditional television has been on a downward trend for years. Facebook Watch will only accelerate the ongoing shift of ad dollars from TV to digital and mobile.

As promising as the ad breaks are, it’s notable that Facebook Watch publishers can opt out of them entirely. Instead, they can make money through product placement, as long as they tag the sponsor for transparency. One can imagine the implications this has for budding videographers, actors, singers, and documentarians who hope to fund their growth via influencer partnerships.

The rise of the influencer owes much of its success in large part to YouTube. But Facebook Watch could prove to be even more fruitful for influencers.

For instance, Facebook Watch will open up new viewing patterns that are less search-oriented than YouTube. Users who watch or subscribe to programs will see those appear in their News Feed along with the other daily updates from friends, rather than having to go to YouTube to check for the latest uploads. This gives influencers a huge opportunity to increase engagement through video, as fan affinity with influencers will become even more important.

3. Facebook Live may become even more important for brands.

Facebook Live, along with Instagram Live, has been gaining popularity with brands ever since it came out two years ago.

Facebook Live allows brands to humanize themselves and connect with fans in real-time. The live shows and events on Facebook Watch will do the same.

READ ALSO  Content is king in SEO - but not for copycats

What resonates with your fans? Do they prefer a structured video format, or something more casual? How often do they want to watch? Daily shows in particular could be a goldmine for brands. The frequency keeps users coming back, ensuring a lucrative return for product placement or ad breaks. That consistent association with their favorite show could make consumers fall in love with your brand.

“Watching video on Facebook has the incredible power to connect people, spark conversation and foster community,” said Daniel Danker, Facebook’s product director. “On Facebook, videos are discovered through friends and bring communities together.”

Three of the four bullet points in the release mentioned connection and bringing people together. Even the few seed shows Facebook funded are touted as “community-oriented” video series.

It makes sense: The sense of community is what led people to fall in love with the platform in the first place.

Because of this, Facebook Watch will likely see much higher sharing and social engagement than other platforms.

Video content marketers should start planning now for how they can create content that fits into those categories and fosters real-time community discussion. Perhaps for the first time, content should be created with the platform in mind first and foremost. Successful videos on Facebook Watch will encourage and facilitate real-time conversations.

So far, everything about Facebook Watch looks good for marketers. The people on the paid team will enjoy seeing more eyeballs on their ads, and the organic folks will get more “authentic” opportunities to align themselves with influencers. More and more, brands are trying to be seen as friends, not corporations. Facebook Watch will let them do just that.

About the Author: Michael Quoc is the founder and CEO of Dealspotr, an open social platform connecting emerging brands, lifestyle influencers, and trend-seeking shoppers in exciting new ways. He was previously the Director of Product Management for Yahoo’s media lab, where he spearheaded the launch of several innovative services in the live video and mobile social networking areas. Michael has been awarded nine patents relating to mobile and social network applications and technology. Follow him on Twitter at @michaelquoc.