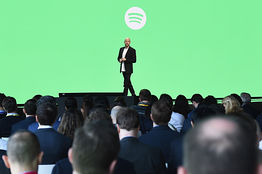 Spotify Technology is poised to become the “primary platform” to connect music fans and artists, an analyst said in one of the most bullish reports to date on the company.

“We see great monetization potential for data, analytical tools, tour marketing and support, ticketing, merchandise sales and other ways that SPOT can help artists and the industry,” MKM Partners analyst Rob Sanderson wrote in a note, raising his price target on Spotify (SPOT) to $245 from $200.

Sanderson forecasts about $580 million of additional data and services revenue in 2023, or about 2% of its total revenue. Paid subscriptions and advertising make up a vast majority of Spotify’s revenue; data and services are an emerging piece of the business.

His optimistic stance on Spotify ties Sanderson with an undisclosed analyst for having the highest target among 29 analysts surveyed by FactSet.

The company’s stock has risen as it adds paid subscribers despite increasing competition from Apple (AAPL) and other purveyors of digital music.

Spotify said premium subscriptions soared 40% year over year, to 83 million, during its fiscal second-quarter earnings report on July 26. The bump came from a bundle Spotify is offering with streaming-video service Hulu, a marketing campaign and family plan.