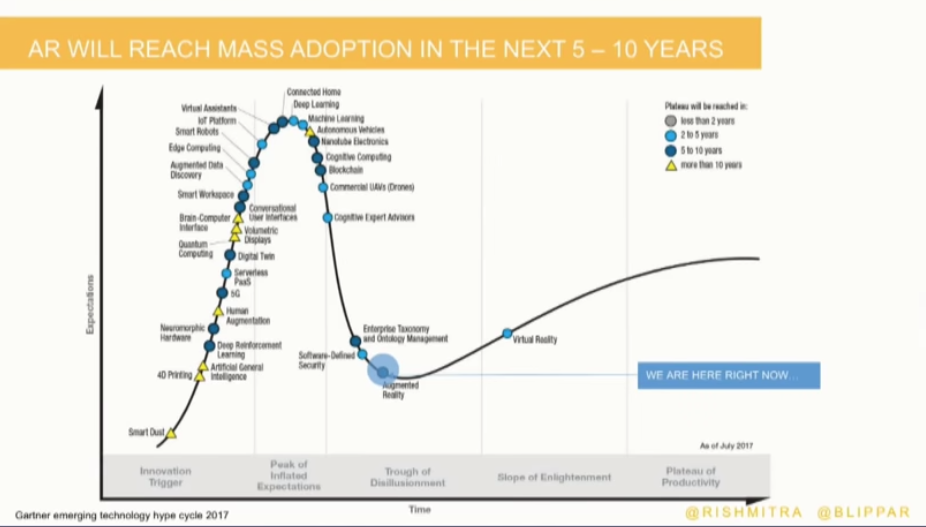 The co-founder & CEO of augmented reality platform company Blippar, Ambarish Mitra, told an audience at the Web Summit in Lisbon, Portugal that within 5-7 years AR will be as ubiquitous as the Internet itself.

Blippar Co-Founder & CEO, Ambarish Mitra spoke about the future of AR at the Web Summit:

What is Augmented Reality?

When you see the world with your eyes and through the eyes of a camera and something is recognized for the camera and you see some content that appears in the field of view, that is augmented reality. It is the enhancement of reality. Do not confuse it with virtual reality. Virtual reality has almost nothing to do with your immediate reality, it’s almost like escaping from reality.

It’s important to note why this industry is really relevant. Computers themselves are continuously evolving. You can see in the very early days it was all about the touchpad and the keyboard and it wasn’t a very natural behavior. Then the whole AI wave came along. What’s the role of AI? Besides artificial intelligence, I always call it IA, which is intelligent assistance. It’s here to serve us. We are not here to serve the AI.

Then touch, which is a very human function, touch computing came into play. In 2010 we saw the first birth of natural language processing. We humans talk and we want the computers to talk back at us. Then the final frontier which is vision. Vision is very important because vision is a large part of what makes us human. A lot of our cognition growing up comes from this sense which we call eyesight. Computers will one day, and beginning to already, will see and understand the world. Computer vision is very relevant.

AI and AR are Deeply Linked

We are already starting to see how computers are beginning to understand. It’s a very important branch of artificial intelligence and in a way augmented reality and AI has been positioned as very separate industries, but they’re very deeply linked. Augmented reality cannot scale until computers understand reality. It’s not just about gimmicky dinosaurs walking down a path. At one point we will see almost the entire Internet transform into an AR medium where everything in the field of view could come to life. It’s very relevant. You may not realize that even though the history of the Internet has been very words driven where you type some words and you get a response, but there are so many so many things in your everyday life which you cannot describe with words.

The next generation of computing is massively going to be vision based. AR promises to be a very lucrative industry because it is connected to the world we see and also a lot more possibilities with devices. Almost everybody has some form of an AR device because you have a camera on your phone. VR is an incredible and equally promising industry but still is a slightly niche utility because of how it moves you away from scaling or moving around the wider world.

This is the famous Gartner hype cycle which it has been applied to augmented reality as well. We started Blippar literally when it was in the very very earth early stages innovation trigger. We’ve actually been through the whole peak of inflicted expectations. We’ve raised a bunch of money and now it’s reaching a point where AR is under the scrutiny of whether it is going to deliver on its true potential.

AR Will Be as Ubiquitous as the Internet

The timing is great, five of the world’s biggest companies, not just in tech but the most valuable companies have invested in augmented reality. We are predicting that from five to seven years down the line it is really ready to be comparable and as ubiquitous as the Internet is today.

Facebook has launched an ad-based platform on AR. Snapchat has the famous face filters and of course, now Google with ARCore and Apple with ARKit are supporting the medium and making their phones compatible with it. So we believe AR is already having a positive impact. 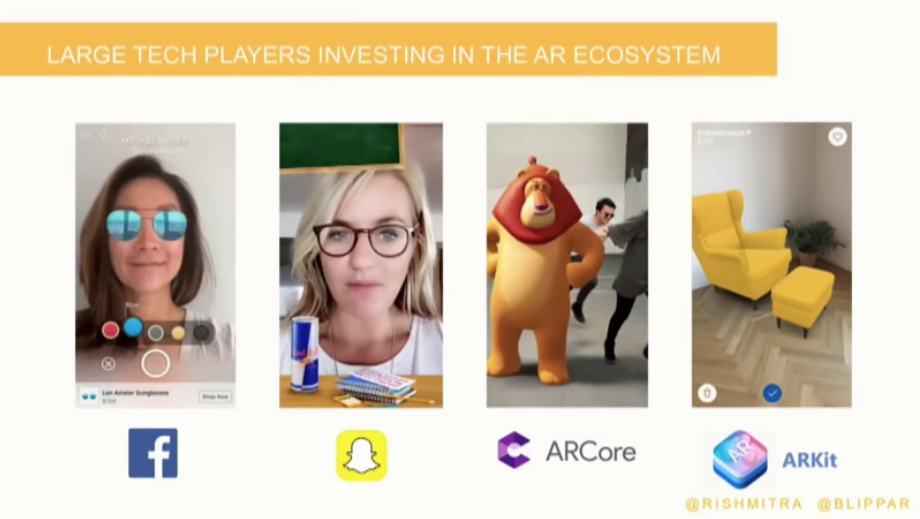 Blippar is a seven-year-old British company operating out of Silicon Valley, New York, and London. Our mission was to create this ubiquitous AR platform which works on any camera device and brings the world to life. It’s been incredible the last two years with several large players coming into AR. It’s really validated the space.

READ ALSO  It’s All About the Customer Experience