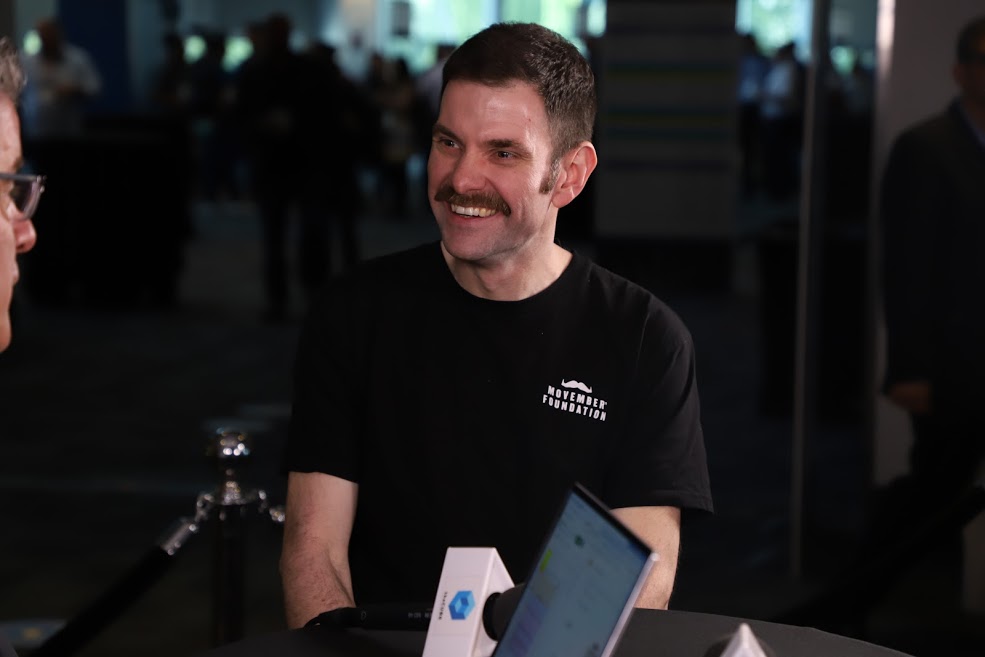 Men are dying in startling numbers, and growing a mustache just might help.

Three major causes — prostate cancer, testicular cancer, and suicide — account for why men are dying, on average, six years earlier than women. Forty-five men die of prostate cancer every hour, and 60 males will die from suicide in the same amount of time.

A way to address this sobering trend was started in 2003 when two men were having a beer in an Australian pub and joked about bringing the mustache back in style. When the conversation turned to a friend’s mother who was raising money for breast cancer, the two mates were inspired to see if they could find 30 men who would each donate $10 to support men’s health and grow a mustache in solidarity for the cause.

The Movember movement was born.

“We realized that men’s health was in a state of crisis,” said Byron Hill (pictured), head of technology at the Movember Foundation. “We’re really trying to develop unique messaging to talk to men in a very direct way. It’s been one way we’ve tried to get some ‘cut thorough’ to really make a difference.”

This week, theCUBE features Byron Hill as its Guest of the Week.

Since that fateful conversation over beer in 2003, Movember has grown into an international phenomenon. The non-governmental organization has raised over $837 million across 20 countries and initiated a number of global projects in support of men’s health.

The organization’s name is a blending of the Australian-English word for mustache or “mo” with the month of November, when efforts were focused on raising awareness around men’s health issues. Women, or “Mo Sistas,” are encouraged to participate as well through various fundraising efforts and contributing to the conversation around men’s health.

Movember’s founders soon realized that the simple act of growing a mustache ignited interest and dialogue that could benefit a worthy cause.

“People were coming up and asking them, ‘What’s that thing on your lip?’” Hill said. “They realized the power of the mustache was something much more. It created conversations; it allowed people to connect with one another.”

It would be tempting to view Movember as simply a clever marketing campaign that focused global attention on important health issues. Yet, the group’s philosophy and strategic approach to building an effective organization carries the hallmarks of a business model that offers its own lessons in achieving success.

READ ALSO  America might survive coronavirus. But will the election?

An example of this can be found in product research. Many businesses will make the mistake of assuming that the product or solution it is delivering is precisely what the market wants, without first getting the customer involved.

Five years ago, the Movember Foundation announced the launch of TrueNTH, a global program focused on improving the quality of life for men with prostate cancer. The program, designed to provide lifestyle advice and treatment information, came from dialogue with men who were being treated for the disease themselves.

“Imagine the power you could have by bringing the community to the table when you’re designing a new product,” Hill said. “We try to do that all the time, having a man in the room who suffered from prostate cancer. The insights they give you will very quickly highlight that you may have no idea what the problem is.”

Like many businesses, Movember has also reached out and formed partnerships to help in its battle with prostate and testicular cancer. Groups such as the Irish Cancer Society, the Prostate Cancer Foundation, and the Prevention Institute have partnered with Movember.

In the past month, Genie Solutions Pty Ltd., provider of medical practice management software, announced that it would work with the foundation to provide digital tools to help men with prostate cancer manage their health. This is in addition to corporate partnerships the group has formed with Mastercard Inc., The Men’s Wearhouse Inc. and Schick Hydro.

It’s all part of an ambitious set of goals that Movember has chartered to reduce prostate and testicular cancer by half and suicides by 25% when 2030 rolls around.

“We know we can’t achieve those goals by ourselves, so we collaborate as much as we can with others who have similar missions,” Hill said. “We realized very early on that bringing together the best and brightest minds in the world to solve these problems was absolutely essential.”

Then there is marketing. It’s hard to imagine that something as basic as a man’s mustache could become a potent symbol of male health, generating what the group likes to call “Mo-ments.”

Over the past two years, Sony Pictures Entertainment Inc. produced a custom public service announcement for Movember based on the release of a new film, two of the group’s executives opened a trading session at NASDAQ, Dutch Bros Coffee issued limited-edition mustache straws that were quickly snapped up by customers in the Pacific Northwest, and Australian trains, trams and buses suddenly sprouted “Mos” on their front grilles.

What began as a way to bring back a fashion trend among men has now become a viral marketing juggernaut that most businesses would welcome in a heartbeat.

“Originally, the idea of the mustache was just fun,” Hill said. “We still try to maintain the fun, but there’s also a serious message we’re trying to get through.”

That message is based on a philosophy, entrenched in the Movember movement, which Hill refers to as the “Community of Why.” A combination of savvy marketing, key strategic partnerships, and listening to the needs of men suffering from cancer have all combined to define the reason for why Movember exists.

From two guys having a beer in an Australian bar 16 years ago to the global organization it has become today, Movember’s “why” is as hard to miss as the mustache on a man’s face.

“We have to constantly anchor ourselves back to the point that there are millions of men out there suffering from diseases,” Hill said. “We want to create a better world for them. If we can align around the why, if everyone in our organization understands why we are doing the work, it helps us deliver some amazing outcomes.”

Watch the complete video interview below, and be sure to check out more of SiliconANGLE’s and theCUBE’s coverage of the AWS Imagine event.