The first industry to see rapid change as a result of blockchain technology was finance and while many only see the surface level of buying and selling cryptocurrencies, it has much deeper implications for the financial world.

Companies of all sizes are able to create “tokens” and raise money for their business by letting investors buy and sell them (like they’d buy and sell shares of a stock). Investors can trade 24/7, without significant fees.

But it doesn’t just apply to finance. Blockchain technology will also make waves in the digital marketing world – along with many other industries – as it gets more widespread adoption in the coming years.

In this article, I’ll explain what exactly blockchain is and how it’s being applied to marketing, plus provide some real-life examples.

Blockchain technology was invented by an anonymous person known as Satoshi Nakomoto for the purpose of being used as a new digital currency, specifically Bitcoin. 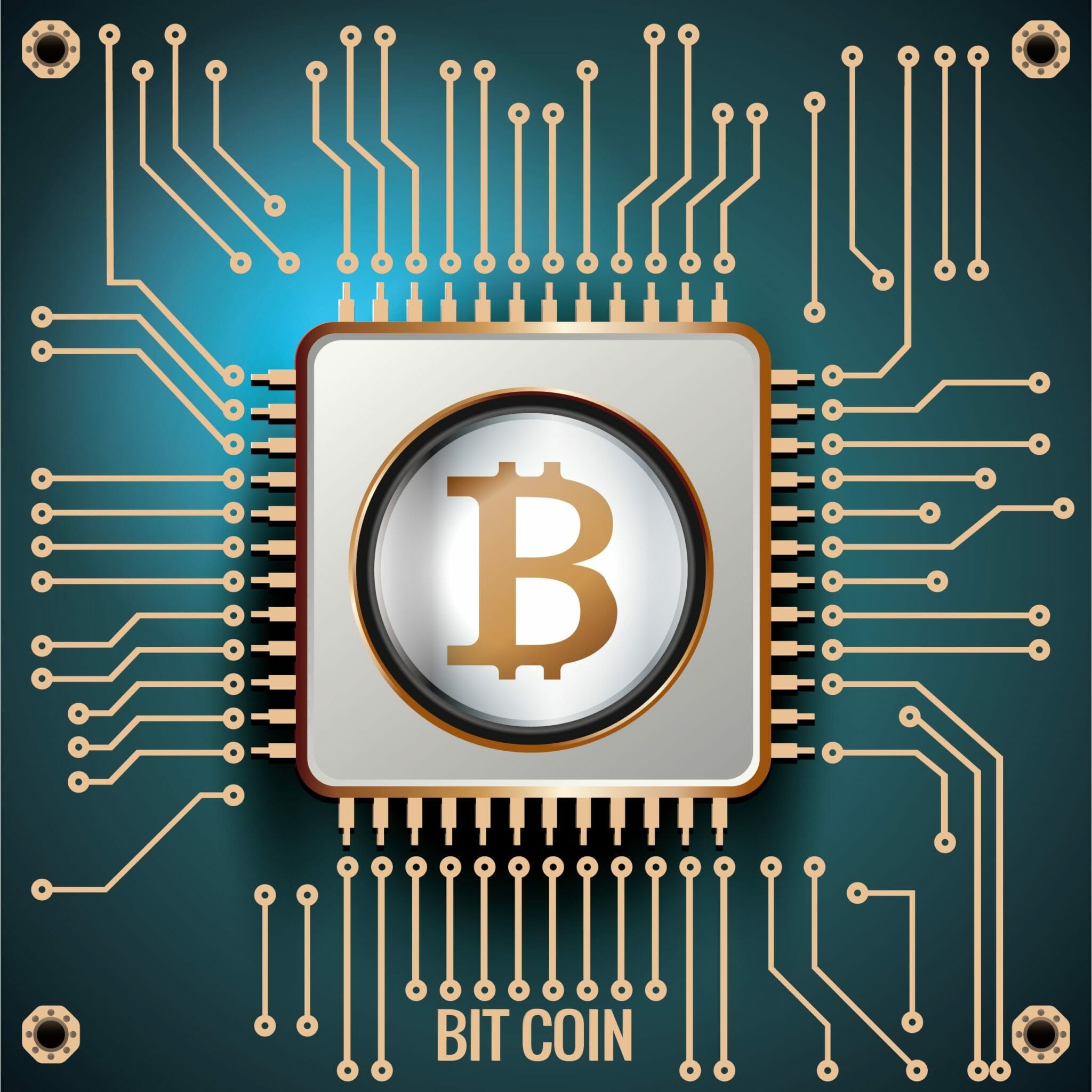 Ultimately, cryptocurrency evolved into something much more significant.

The blockchain is pretty technical at its core, but essentially it’s a way for digital information to be distributed and not copied. Click To Tweet

A simple way to understand blockchain technology is to relate it to Google Docs.

Imagine a document that’s been copied tens of thousands of times across many different computers — and imagine that the computer network is designed to regularly update the doc.

The blockchain is like one big “shared document.” It has blocks of identical information that’s stored across its network — and for that reason, it can’t be controlled by a single person and it has no single point of failure. Because of that, the blockchain hasn’t had any problems due to its structure, only human error (i.e. hacking).

Here’s a good diagram that depicts how the blockchain works: 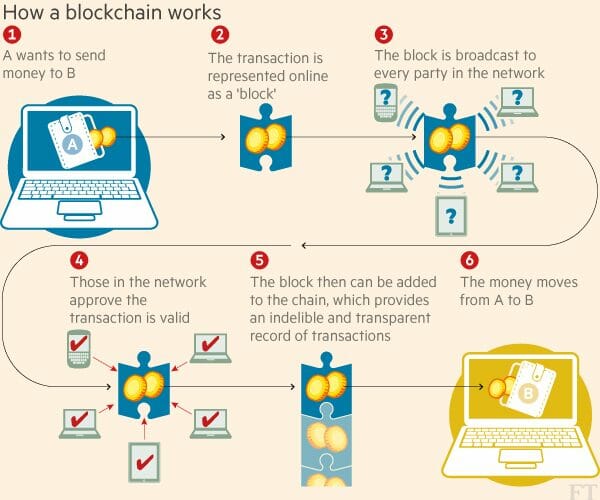 The blockchain allows for minimal human errors and ensures that every transaction that’s made is a secure, validated one. It’s understandable why the financial world was the first to capitalize on this technology.

But it also has implications for other industries, like marketing.

The biggest benefit of blockchain technology is that it allows for decentralized communication between different parties. In the marketing world, there are different intermediaries, or “middlemen,” that control the territory between advertisers and users.

One of the reasons a website might choose to display Google banner ads on their site as opposed to organically finding advertisers is because Google is a source of trust. If a company is “vetted” by the Google Display Network, then it’s likely that it’s a credible business that won’t damage the brand of the host website. Google also handles the processing of transactions so that the website owner is paid fairly for clicks generated on the advertiser’s ad.

In this case, Google is essentially the go-between for the advertiser and the website owner. And for that reason, they take a cut of the profits.

Through the blockchain, this process would unfold a bit differently. Website owners wouldn’t need to go through the Google Display Network to find advertisers because each “user” will already be validated and verified. The advertiser would know that they’re paying for genuine clicks and the site owner could trust that the amount that they’re being paid is fair. There wouldn’t be any need for a middleman like Google.

One of the biggest value propositions of the blockchain is the level to which everything is documented and verified, which means you’d build up more trust with your customers. Click To Tweet

For example, a customer could get a “behind-the-scenes” look of a retailer’s supply chain and find out exactly how the product was made. That means that they’ll know whether a company is trustworthy about their claims or not.

Companies that Are Revolutionizing Marketing through Blockchain

BitClave is a marketing technology company built on the blockchain.

Currently, almost all advertising that marketers do is done through some sort of intermediary. We pay Facebook to run ads to their users. We pay Google to show our web page at the top of the SERPs. We pay YouTube to play our videos to a certain group of viewers. 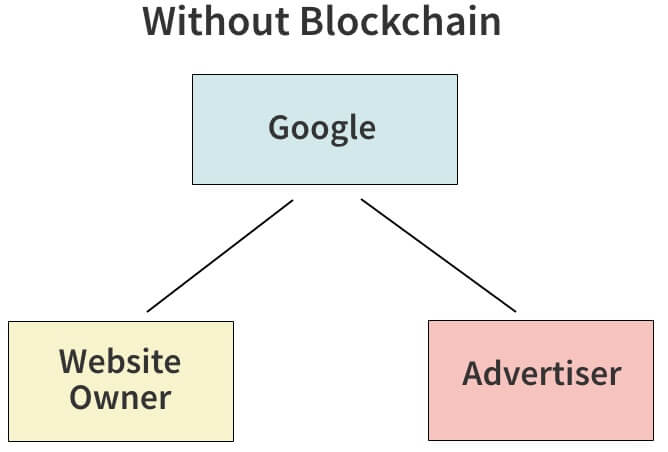 With the blockchain, website owners and advertisers can communicate with each other directly because users and clicks are automatically validated. 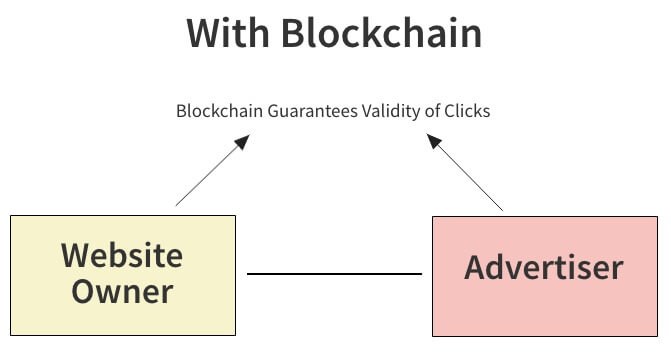 BitClave’s premise is that businesses have to pay high fees to middlemen like Google and Facebook, so instead they eliminate this role through the use of smart contracts.

A smart contract is a program that automatically controls the transfer of currencies between two parties. In BitClave’s case, consumers have full control over their own data without being forced to hand it over to an advertiser. They can choose to sell that data to businesses and opt in to different advertising services.

On the blockchain, there are two types of tokens: utility tokens and security tokens. Utility tokens — like Bitcoin, Ethereum and Ripple — are what most people are familiar with.

Security tokens are an important, but lesser known, part of the blockchain ecosystem. These tokens are issued by companies that get their value from an external asset — for example, a venture capital or private equity firm. Investors can buy security tokens like they’d buy shares in a stock and companies can issue security tokens to raise money for their business.

But the process for launching a security token is costly and time consuming. Token issuers need to make sure that their investors are verified and accredited, and jump through a lot of federal regulations.

Polymath lowers the barrier for security token issuers (i.e. companies) to supply tokens to investors and raise money for their business.

Marketers can leverage this in the same way they’d leverage a platform like AngelList. Just like AngelList lets you crowdsource funding from investors for a project, Polymath makes it easier to raise investment to expand your business through security tokens.

OrionCoin is tackling the world of loyalty and reward programs.

Companies use loyalty programs to help increase retention among their customers. For example, a credit card company might offer travel rewards points, or a retail store might offer points for customers who purchase a certain amount of products.

But there are a few problems with how loyalty programs currently operate.

For one, there’s an infinite supply of points. Customers aren’t motivated by scarcity or urgency, so it can trigger complacency and reduced retention rates.

Points are also not tied to any monetary value. So if a customer doesn’t want any of the rewards he or she is entitled to with the number of points they’ve accumulated, the points are essentially worthless. Customers are limited by the type of rewards companies offer.

OrionCoin uses the blockchain to supply companies and their customers with loyalty points, which they call “ORC.” There’s a finite number of ORC produced, which means that the more companies adopt OrionCoin, the more valuable ORC will become. And because there’s not an infinite supply of ORC, consumers are more motivated to accumulate them.

The blockchain also has built-in transparency, which means that OrionCoin cannot artificially reduce the value of their coin to increase profits — like many merchants do today with their loyalty points.

The other problem that OrionCoin tackles is the intrinsic value of each “point.” Most loyalty programs offer rewards for points that are largely unattainable. For example, a credit card company might let their customers claim their reward for a free plane ticket, but it may take many months (or even years) to rack up that many points.

If customers aren’t excited at the potential rewards they could earn — either because it takes too much time to rack up points or because the rewards offered aren’t appealing enough — then the loyalty program wouldn’t be as effective.

With OrionCoin, customers can trade ORC for cash, which means they can spend it on whatever purchases they want. Through the blockchain, loyalty programs would feel less limiting and could potentially help marketers keep more customers retained for the long term.

Rouge is trying to use the blockchain to change the coupon industry.

This is another industry where there’s a lot of fragmentation and technological limits.

In 2016, there were 307 billion coupons issued by companies, but only 2.2 billion were actually redeemed. When it comes to finding coupons, customers usually have to sift through expired coupons or other coupons that have been promoted but can’t be redeemed.

Rouge is tackling this problem by building a marketplace where brands can issue coupons and users can acquire them.

Through Rouge, brands can issue unique coupons and track them — and because the date is coded into the coupon, expired coupons won’t exist online. Coupons generated from the Rouge blockchain can only be used once, so individuals can’t hack the system and create duplicate coupons.

The blockchain also gives coupons additional value, since it opens them up to trading on the secondary market. Customers can share promo deals through a trading marketplace where new customers exist.

The blockchain will disrupt a lot of industries in the coming years by removing the middlemen and allowing different players in the space to interact through smart contracts.

Companies are already leveraging blockchain technology to increase transparency and reduce friction, and marketers can leverage these tools to acquire more customers at a lower cost.