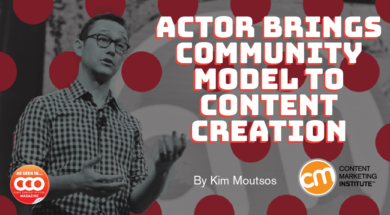 Don’t be fooled by his moniker on HITRECORD, the collaborative production company he founded with his brother in 2004. Actor, director, writer, and producer Joseph Gordon-Levitt is anything but a regular Joe.

Having graduated from child actor to blockbuster star, it’s hard to imagine that Gordon-Levitt ever struggled to find work. Yet an actor’s life is never certain, and dry spells are not uncommon.

At Content Marketing World 2017, Gordon-Levitt talked about how just such a career dry spell led him to seize control of his creative destiny and to build something few startups and brands ever achieve: a thriving online community that not only pays for itself but also shares the wealth with its contributors.

CCO: How did the idea for HITRECORD come about? Were there moments in your life that formed the seeds for this project?

Gordon-Levitt: I’ve been an actor since I was 6 years old. At 19, I quit to go to college. When I wanted back in, I couldn’t get any acting roles. That was painful.

When you’re an actor, you depend on someone else to give you a role. That couldn’t be how it went in my life. I had to be creative and express myself on my own terms. HITRECORD became a symbol for me taking responsibility for my own creative outlet – for being the one to push that record button on the video camera. It’s also a pun. In the past, media was an object you would consume, like a hit record. Now media is more and more something you do, an action you take, something that you’re a part of.

[email protected] became a symbol for me taking responsibility for my own creative outlet, says @hitRECordJoe. Click To Tweet

HITRECORD evolved organically as the (online) community grew over the last 10 years. I think that’s a huge strength. You can feel the homegrown origins in the nature of HITRECORD when you go there. It’s not just a startup that was conceived as a business model. I think people feel that. It’s a big part of why creative people – who are notoriously difficult – really do trust HITRECORD. They come. They contribute. They participate. It’s not just a scheme to make money or to collect your data.

CCO: HITRECORD feels like a community for creative brainstorming and ideation. But the platform also generates finished/monetized projects. Do those projects produce enough revenue to support the community or will there be other ways to monetize?

Gordon-Levitt: For a while, it was purely a hobby I worked on with my brother. We didn’t spend money or make money. And then, starting in 2010, we launched as a production company with our co-founders.

To accomplish those things, we had to figure out the legal, intellectual property side. How would it pay for itself? How would artists get paid?

I’m a big believer that if someone works on a project and the project earns money, that person deserves some of the money. It’s great that artists are putting their stuff out there for free if that’s what they want. What I don’t like is when companies make money from contributors without sharing the money. That happens a lot on the internet.

If someone works on a project that earns money, that person deserves some of the money, says @HitRecordJoe. Click To Tweet

So we figured out how to launch HITRECORD as a product. For the first three years, I was bankrolling it. For the last four years, it’s been profitable. It’s paid for itself and grown.

HANDPICKED RELATED CONTENT: How to Grow Your Audience From Zero to Millions in Less Than 5 Years

CCO: What’s the role of non-media brands that produce content on HITRECORD?

The far more lucrative revenue stream for us is branded content. We have partnerships with lots of different brands. We’ve just wrapped our third year with LG, so we’ve now made three wide-playing TV spots for them. The centerpiece of one campaign was a 30-second commercial during the World Series that performed really well. We also make 60-second versions to go online.

Most creativity online is an individual posting something of their own: “Hey, world, look what I did.” On HITRECORD, we’re more about what we can do together when we collaborate. Even very successful sites that crowdsource creativity aren’t really collaborative. They’ll put out a brief and say, “Whoever fulfills this brief the best will win the prize.”

What we do is different. When we issue creative challenges, it’s about people working together to fulfill the challenge in the best way possible. It’s very rare that a single writer will fill the challenge themselves. Other writers will jump in and remix what the first writer did. The result isn’t limited by what the best contest entry is. It can be better than your best entry to the contest. In that way, working together is more effective than just a bunch of isolated individuals working on their own.

CCO: I was inspired by the HITRECORD-produced video of “You’re Not the Only One” as it sums up how a massive group of creatives across multiple disciplines can come together to produce amazing television. How does HITRECORD inspire you personally as an actor and director?

Gordon-Levitt: That song is about not being alone. The internet can be a lonely place even though it brings people together from all over the world. A lot of the platforms on the internet don’t actually encourage togetherness. They don’t encourage people working together to achieve something they wouldn’t be able to achieve on their own.

The result of what online culture has become is everyone trying to be loudest to get the most attention for themselves. There’s something really uplifting about seeing people on HITRECORD come together and prop each other up, working together towards a common goal. The internet’s potential is in collaboration. In the past, it wouldn’t have been possible to have all these people putting their heads together on one thing.

The inherent challenge is how to organize so it doesn’t devolve into chaos. That’s what we work on. We haven’t perfected it yet, but over time we keep getting better at it.

The internet’s potential is in collaboration, putting all these heads together on one thing. @hitRECordJoe‏ Click To Tweet

This moving short film was created from a member-submitted story about how she came to see the stars for the first time at age 16.

Gordon-Levitt adapted the “record” into a script and issued challenges to the visual artists in the community to illustrate the story around actors Elle Fanning and James Patrick Stuart. Another member contributed the score, from which member musicians in many countries performed their contributions and submitted the recordings.

A version of this article originally appeared in the May issue of  Chief Content Officer. Sign up to receive your free subscription to our print magazine every quarter.

Experience the 2018 keynote from Tina Fey at Content Marketing World Sept. 4-7 in Cleveland, Ohio. Register today for best rates and use code BLOG100 to save $100.